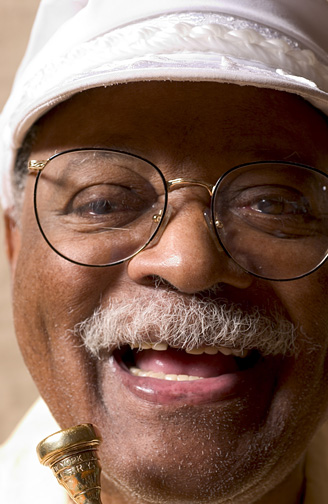 slideshow
Today, let's celebrate the memory of one of our city's all-time jazz greats, the late trumpeter Clark Terry, who was born December 14, 1920 right here in St. Louis.

Although Terry departed this planet in February of last year, his vast catalog of audio and video recordings remains for all to enjoy, and today you can check out some of StLJN's favorite videos featuring him.

The first clip up above, recorded in 2001, pairs Terry and the Queen of Soul, Aretha Franklin, in an extended version of the trumpeter's best-known song, the comedic blues “Mumbles." They're backed by a band featuring Herbie Hancock on piano, Russell Malone on guitar, Ron Carter on bass, Roy Haynes on drums, and James Carter on saxophone.

After the jump, you can see Terry doing two songs recorded around 1980 in a guest appearance with NBC's Tonight Show band, a group that he integrated as its first African-American member in the early 1960s and remained with for much of that decade. In this video, he's featured soloing on an up-tempo blues, and then plays and sings Fats Waller's “Squeeze Me."

After leaving the Tonight Show, Terry led his own orchestra, the Big Bad Band, intermittently through the 1970s and early 1980s, and the next clip shows just over 19 minutes of that group in action.

The next clip shows Terry with a small group drawn from the Count Basie Orchestra, with whom he got his first big break in 1948, performing “Royalty in Rhythm." That's followed by a 1958 video of the Duke Ellington Orchestra playing “El Gato," which featured the band's trumpet section of Terry, fellow St. Louis native Harold “Shorty" Baker, Ray Nance, and Cat Anderson, for whom the piece was named.

Finally, you can see an example of Terry's showmanship and good humor as he instructs and conducts an audience to sing along with “Bye Bye Blackbird." This recording was made on April 19, 1998 by an audience member attending the concert at Ohio State University in Columbus, OH.