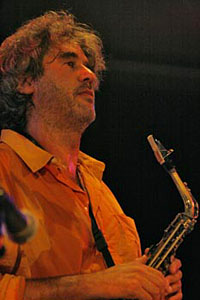 slideshow
Today, let's have a look at some video clips featuring saxophonist Tim Berne and his band Snakeoil, who are coming to St. Louis to perform in a concert presented by New Music Circle next Friday, May 8 at the The Stage at KDHX.

Snakeoil is the latest of several bands led by Berne, who's 60 years old and originally from Syracuse, NY. Something of a late bloomer musically, Berne didn't start playing saxophone until he was in college, focusing mostly on soul and funk until he heard Julius Hemphill's 1972 recording Dogon A.D. and began investigating jazz.

Moving to NYC, Berne wound up becoming friends and studying music with Hemphill. (He remains a strong advocate for his late mentor's music, recording some of it on the 1992 tribute album Diminutive Mysteries and also using his label Screwgun Records to re-release select Hemphill recordings.)

Even though Berne usually is identified as an improvising musician, Snakeoil is principally a vehicle for his compositions, which tend to be intricate, multi-part affairs incorporating complex polyrhythms and harmonies. For listeners of a certain vintage, the blend of Berne's alto sax with the clarinet or bass clarinet of Oscar Noriega may even sound a bit Zappa-esque, while pianist Matt Mitchell and Ches Smith, playing mallet percussion as well as a drum kit, can assume the traditional functions of a rhythm section, or not, depending on the requirements of the piece.

Snakeoil released their eponymous debut album on ECM Records in 2012, followed by Shadow Man in 2013. More recently, they've just put out a new record called You've Been Watching Me, with their show in St. Louis being the twelfth of a 15-gig tour in support of the release.

You can hear music from all three of their albums interspersed throughout today's videos, starting up top with an excerpt from a show in October 2013 at The Windup Space in Baltimore, MD.

After the jump, there are three excerpts from a concert on March 29 of this year at the Biblioteca Nacional in Buenos Aires, Argentina, and a performance of “Lost in Redding" recorded later that same night at a different venue called Rosetti. Note that all these clips were recorded by audience members on handheld cameras, so while the audio is quite listenable, the video can get pretty shaky in spots.

The last two clips were recorded in May 2013 at The Stone in NYC, and though they also were made by audience members, the visuals of “OC/DC" and “Forever Hammered" fortunately are a bit more stable.

For more about Tim Berne and Snakeoil, check out Berne's just-published interview with the Post-Dispatch's Calvin Wilson, and his 2012 interview with Nate Chinen for Jazz Times.