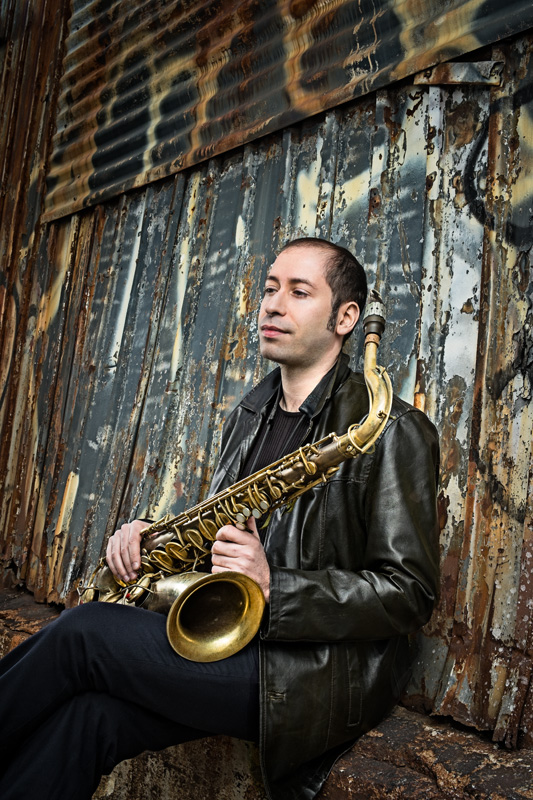 December 7, 2010 (NYC)—With I Will Follow You (Bee Jazz), French-born, Brooklyn-based tenor and soprano saxophonist Jerome Sabbagh brings his singular vision to the fertile ground of improvised music. Bolstered by the broad color palate of virtuosic guitarist and longtime collaborator Ben Monder, and the masterful rhythmic orchestration of legendary drummer Daniel Humair, Sabbagh's lyricism and glowing sound serve as beacons in an improvised journey at once hauntingly beautiful and aggressively unhinged.

Taking advantage of the adventurous setting of a trio without a bass, the players' seamless interaction makes it impossible to discern who's leading from who's following, as they shepherd the listener through an ever-changing tapestry of sound. “Without a bassist, there's less of a desire to go into time," says Sabbagh “and it opens up new textural possibilities."

Despite the constant risk taking—or perhaps because of it, the music is always compelling. “There's this cliché that improvised music is hard to listen to," Sabbagh notes. “Maybe I'm an idealist, but I find the best improvised music has a directness of expression that immediately draws the listener in."

I Will Follow You follows three critically acclaimed efforts as a leader. North (voted Best CD of 2005 by the readers of French monthly magazine Jazzman) and Pogo (four stars in DownBeat) both feature Sabbagh's uncanny, song-like compositions and lush tone, in a quartet that includes Monder, bassist Joe Martin, and drummer Ted Poor. One Two Three (four stars in DownBeat), an album of standards played in the totemic sax-bass-drums instrumentation pioneered by Sonny Rollins, features bassist Ben Street and drummer Rodney Green. I Will Follow You represents a bold departure from the more controlled settings of these albums, yet retains the lyricism, clarity of purpose, and melodic flair that are the hallmarks of the saxophonist's style.

The smooth ebb and flow between tracks has an appealing narrative continuity, opening with the controlled chaos of the title track, which builds in anticipation as Humair moves from brushes to sticks and Monder answers him, at the flick of a pedal switch, with ferocious distortion. Other highlights include “Comptine," a moody free ballad with echoes of Bartok and “The Clown," an exploration of a simple melody that becomes increasingly dense as Sabbagh and Monder improvise symbiotically in chromatic counterpoint. I Will Follow You concludes with a sumptuous rendition of “I Should Care," the album's only standard.

“I spent a lot of time arranging the sequence of the record, trying to make it into something that could be listened to from start to finish," Sabbagh remarks. “The tracks are short, especially for an album that's mostly improvised. Everything was wide open, but we all strove for concision, which was good, since dragging things out is an easy mistake to make in a free setting."

Sabbagh composed the music with the sounds of Monder and Humair in mind. He set out to avoid prefabricated compositional patterns by writing with pen and paper only, as opposed to sitting at the piano. Coupled with the six improvised pieces, miniatures of unfettered freedom and keen interplay, the compositions endow the album with a self-contained quality, “like a little world unto itself," he says.

Though this is the first time they play together, the three players mesh with a psychic energy that would be impressive even for a longtime working band, a testament to Sabbagh and Monder's exceptional musical bond, and to the 72-year-old Humair's peerless listening ability. A first-call drummer in Europe whose career trajectory took him from playing bebop with the likes of Bud Powell and Dexter Gordon to improvising with avant-garde explorers Tony Malaby and Ellery Eskelin, the protean Humair was an obvious choice for the shifting dynamic of this trio.

“Daniel is a master free player but came up swinging with the best, and he is also a painter. Form is important to him, as it is for Ben and I," says Sabbagh. “Even when we are playing free, we are ever-conscious of creating a narrative arc in the moment."

Sabbagh was exposed to music at a young age by an early teacher, pianist and composer Annick Chartreux, who first inspired him to transcend the confines of genre, a lasting influence. “She would play the overture to Mozart's The Magic Flute, 'So What' from Kind of Blue, and some Jimi Hendrix, all in the same listening session." Since moving to New York in 1995, Sabbagh has played with Guillermo Klein, Bill Stewart, Billy Drummond, and Victor Lewis, in addition to numerous others.

Asked about his musical values, he explains: “The keys for me are melody, sound, and interaction. Each player weaves a unique voice into the collective in a way that makes sense with the material, while staying true to their inner song. I think the process of making good music with people is similar whatever the project may be."

I Will Follow You is yet another exciting example of Sabbagh's musicianship, integrity and artistic vision.

“A startlingly good young jazz musician [...] Sabbagh chooses notes judiciously and swings firmly. And Sabbagh and North grow stronger and deeper with each listening."
- Marc Meyers, All About Jazz

“Mr. Sabbagh played with untroubled self-assurance, and his songs had a sleek and sturdy appeal. Just as crucially, his colleagues strove for the unexpected, individually and as an ensemble. [...] Mr. Sabbagh avoided direct allusions to the saxophone totems. What he is working toward, simply and effectively, is a sincerely personal vocabulary."
- Nate Chinen, The New York Times

“You don't find many post-bop era musicians recording programs of all standards; fewer still choose to do them in a pianoless trio. French native Jerome Sabbagh relishes the challenge with One Two Three (Bee Jazz) and his nerve pays off. Avoiding any of the usual stylistic cliches, Sabbagh lets these compositions speak for themselves. He's not afraid to simply play the melody, although when the spirit strikes him he can spin out inspired improvisations."
- James Hale, DownBeat (4 stars)

“A refreshing, cliché-free young tenor and soprano saxophonist. In this, his second album as a leader and one including only his compositions, he creates moods as well as lines and spaces."
- Owen Cordle, JazzTimes

“An exceptionally assured and compelling debut as a leader [...] The music is consistently evocative, tuneful and substantial."
- Peter Hum, Ottawa Citizen

“Over the past few years of performing together, they've bonded, learned, and are continuing to define their sound."
- Mark F. Turner, All About Jazz