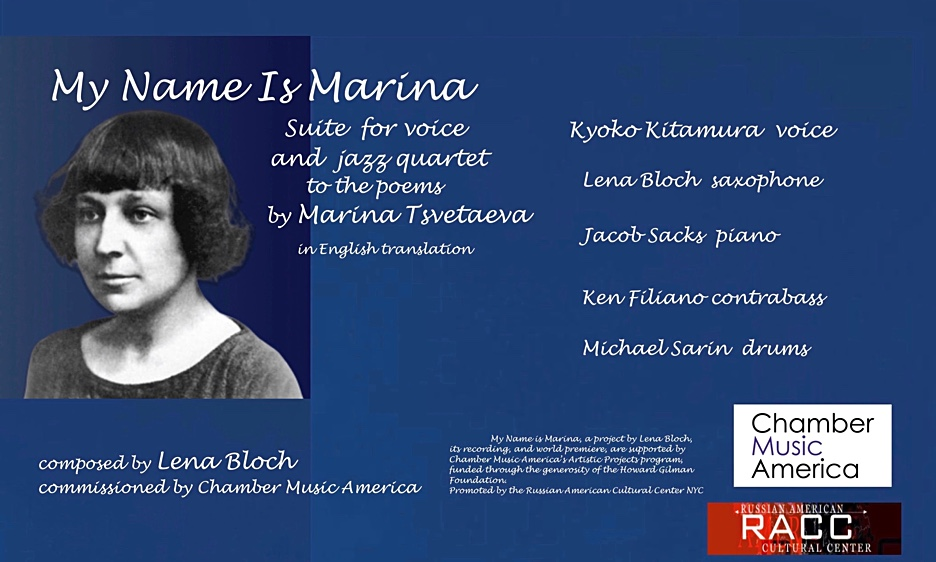 Unwaveringly cohesive... bone-deep gorgeousness... complex, compelling and beautiful, sounds of the highest quality and inspiration.
&#151Dan McClenaghan, All About Jazz

On the 130th anniversary of the birth of Russian poet Marina Tsvetaeva, during a time when immigrants, women and artists face increasing struggle in the United States, acclaimed Russian-born saxophonist and composer Lena Bloch premieres My Name Is Marina, a commissioned jazz suite for ensemble and voice featuring her own English translations of Tsvetaeva’s works. “Throughout my life, Tsvetaeva has served as a model of resilience as an immigrant, an artist and a woman,” says Bloch, “all of which have been under siege in modern political discourse, all the more reason to amplify her voice for a modern audience.”

Joining Bloch for the performances will be vocalist Kyoko Kitamura, pianist Jacob Sacks, bassist Ken Filiano, and drummer Michael Sarin. The performances are supported by the Russian—American Cultural Center. The recording and world premiere are supported by Chamber Music America’s Artistic Projects program, funded through the Howard Gilman Foundation.

Tsvetaeva is hailed as one of the greatest poets of 20th century Russian and world literature. Though her work is revered in her native Russia and Europe, she is less known in the United States, unlike her contemporaries including Alexandr Blok, Anna Akhmatova and Boris Pasternak. Born in Moscow in 1892 to a professor and a concert pianist, Tsvetaeva published her first collection of poems at 18. She lived during turbulent years in Russian history, facing separation from her husband and children and leaving home to live in Berlin, Prague and Paris. She eventually returned to the Soviet Union where her husband was executed and her surviving daughter was sent to a labor camp.

After facing poverty, exile and great loss, she died in 1941. Her poems are known for their passion and lyricism, linguistic experimentation, influence of folk songs and portrayal of women’s experiences.

Bloch was also born in Moscow, immigrating to Israel and then to Europe, where she played jazz for 12 years before settling in New York in 2008 and quickly becoming a contributor to the city’s fertile jazz scene. Her unique cultural background contributes to her original style, personal expression and broad range of influences, from Eastern European and Middle Eastern traditions to 20th and 21st century classical music.

Says Bloch, “Tsvetaeva’s themes are especially relevant to this country of immigrants, now more than ever. Her poetry never bemoaned the status of an alien in a strange land, never dwelled on the loneliness or isolation of a life in exile. Instead, her work celebrated the strength that she drew from her uprooted existence: the power she had to speak freely despite all circumstances, the indomitable will to persevere. Those aspects of her work resonate with me as a lifelong nomad myself, and they will resonate with countless immigrants in this country.”

Performances of My Name Is Marina are supported and promoted by the Russian-American Cultural Center (RACC).

My Name is Marina, a project by Lena Bloch, its recording, and world premiere, are supported by Chamber Music America’s Artistic Projects program, funded through the generosity of the Howard Gilman Foundation.