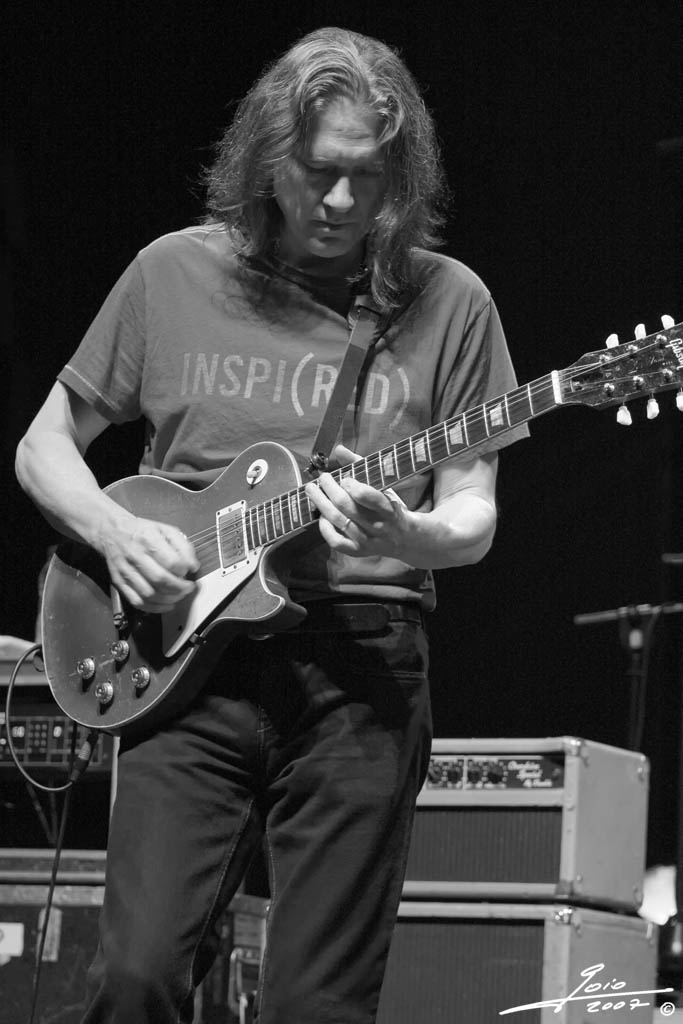 slideshow
For Soul on Ten, his fourth and latest album for the Concord Music Group, five-time Grammy nominee Robben Ford is definitely on ten, playing with the kind of skill and experience that had Musician magazine dubbing him one of the 100 Greatest Guitarists of the 20th Century.

With eight of the ten tracks recorded live over two nights at The Independent in San Francisco last Apriljust across town from the Fillmore, where the north California native grew up hearing the likes of B.B. King, Jimi Hendrix, Duane Allman, Eric Clapton, Jerry Garcia, Albert King, Jimmy Page, Michael Bloomfield and Elvis BishopSoul on Ten (August 11, 2009/Concord Records) captures Fords unique style, one that combines, yet transcends, his roots in jazz, fusion, blues, soul and rock, distilling the past into the moment, with an eye on the future.

I wanted to capture that experience of playing live, says Ford of the album, which follows his three other Concord Music Group releases, Blue Moon (2002), Keep on Running (2003) and Truth (2007). I find it has a lot more impact than a studio recording. Music is a living, breathing thing. Real art is timeless. It doesnt have a beginning and an end. Its all about the present moment.

The album features Robben's road-tested band of the last few years. Athens-born drummer Toss Panos is a musicologist, a student of African percussion and Greek music, who has also played the blues in South Central L.A., bringing a world music perspective to the mix, while L.A.-born bassist Travis Carlton is the 26-year-old son of jazz great Larry Carlton, with whom Ford also played. Organist Neal Evans provides the distinctive B3 on five of the tracks.

The material ranges from the title track and “Nothin' to Nobody," his collaboration with Michael McDonald, from 1999's Blue Thumb album, Supernatural, and Indianola, his B.B. King tribute, from 2002's Blue Moon, to “There's Never Be Another You" and “How Deep in the Blues (Do You Want to Go)," from 2007's Truth. There are also three brand-new Robben Ford compositions in “Earthquake" and a pair of studio recordings, “Don't Worry About Me" and “Thoughtless," as well as covers of classic Chicago blues numbers in Willie Dixon's “Spoonful" and Elmore James “Please Set a Date."

This was about the live experience of playing and hearing music, he explains. What music is really about is what happens when its played in front of people. That's when you really understand it. That's what I wanted to capture.

And capture is he does, in only the way Robben Ford can.

“Supernatural" starts with a wah-wah psychedelic guitar interlude before slipping into an evocative jazz-like riff, all of which contributes to the difficulty of pigeonholding Ford's music into a single category.

Its no wonder Ford doesn't want to be pigeonholed. His background is similarly eclectic, having started out touring with blues legends like Chicago harp player Charlie Musselwhite and singer Jimmy Witherspoon, then going on to play with Joni Mitchell as part of Tom Scotts L.A. Express, George Harrison on his '70s Dark Horse tour, jazz icon Miles Davis and fusionists the Yellowjackets, as well as rockers Greg Allman and Phil Lesh.

His version of “There'll Never Be Another You" includes an elongated improvisation that touches on Miles Davis at his most spacious, with a Panos drum solo that eventually involves the entire band.

As for his version of Dixon's classic “Spoonful," Robben says: That's something I've wanted to play for a long time, but I never found quite the right band or arrangement to feel good about it, but it finally came together with this group. It takes a lot of nerve to do a song that was originally done by Howlin' Wolf and then a classic version by Cream. So I did my own thing. I didn't try to imitate anybody.

“Nothin' to Nobody" mutates from R&B to jazz, with a featured bass solo by Carlton and Evans gurgling B3 organ part.

In tackling Elmore James Please Set a Date, Ford combined the song with Jimmy Reeds You Don't Have to Go to come up with a hybrid mutation. I rarely play a straight-ahead 12-bar blues like I did here, he reveals. I didn't want to cover something everyone's heard. I found the Jeames on a three-volume set from Chess, Chicago: The Blues Today that also included songs by James Cotton and Otis Rush. I just really like this song, but its half-written. He's faking the lyrics on most of it, so to make it a whole song, I combined it with the Reed song.

About his love for the Chicago blues, Ford says: There's a lot of creativity, a great variety within that context, a lot of different kinds of songwriting--great drum, bass, rhythm section stuff. For me, these things cant quite be pinned down. There are surprises within the format, if you look for them, which I do.

“Earthquake" is a new song which Ford describes as a black comedy about the difficulties in maintaining relationships with the demands of a touring musician forced to be away from home much of the time. Ive traveled miles to find you waiting/Waiting for someone Ive never been, he sings. Being a musicians really hard work, debilitating, and pretty awful sometimes.

It's a subject he returns to in Thoughtless, one of two studio recordings that mark his continued emergence as a singer/songwriter alongside his recognized ability as a guitarist. On these two songs, Ford is joined by keyboardist Larry Goldings, Sheryl Crow bassist Jon Button and sax player Karl Denson.

Thoughtless is a song about separation and being on the road, with the person you left back home wondering where you are and why youre gone, he says. Its a lonely road being a musician. But this is what I do. I have to do it.

“Dont Worry About Me" continues the socio-political bent of his last album, Truth, as it points out society's ills, while also acknowledging the urge to disengage: Its not so bad to be alone/I got nobody bending my ear.

The war is still going on, and these guys will keep it going as long as they can make money on it, he says of the songs abrupt shift in attitude. The song says I'm cool, I get the picture, but don't kid yourself. There are some real horrendous things happening on this planet. There's a monster rearing its head.

The title to the new album perfectly describes Robben Fords commitment to his muse. Hes at maximum capacity and there's no holding him back.

One listen to Soul on Ten makes you realize Robben Ford means it.