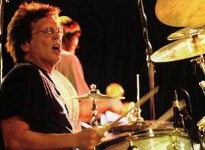 Drummer and Little Feat founder Richie Hayward passed away Thursday, August 12, 2010, in his current home of Victoria, British Columbia. He was 64 years old. Originally Hailing from Clear Lake, Iowa, Hayward would be instrumental in the percussion on scores of recordings by Robert Plant, Robert Palmer, Bob Dylan, Eric Clapton, Joan Armatrading, Ry Cooder, Warren Zevon, Taj Mahal, Buddy Guy, and many others, during his lengthy career. Hayward had been suffering from liver cancer and succumbed to pneumonia.

Hayward was preceded in death by Little Feat co-founder Lowell George, who passed away from recreational drug misadventure on June 29, 1979. In 1969, George was asked, by then-employer Frank Zappa, to leave the Mothers of Invention because George had composed a song referencing drug use called “Willin.'" George absconded, with bassist Roy Estrada, and added drummer Richie Hayward from his band The Factory, forming Little Feat. The rest is American music history.

In his incendiary I Hate New Music: The Classic Rock Manifesto, Brit Dave Thompson opines that “The Day the Music Died" was not February 3, 1959, when a plane crash claimed the lives of Buddy Holly, Richie Valens, and JP Richardson, Jr. (The Big Bopper) but was:

...somewhere within the ten-month span [of 1978] during which the following albums fell off the new-releases rack.

Eight classic albums...eight classic rockers...and eight slabs of such overproduced, overwrought, and overindulgent awkwardness that even the “urgent" songs procrastinated furiously while the slowed-down ballads simply sank without trace.

In contrast to this, I offer my own day the music died. That day was one Tuesday morning in March, 1978 when Little Feat released the finest live rock album recorded, Waiting for Columbus (Warner Brothers). The listener need hear only the first full track of the album, George's “Fat Man in the Bathtub," from Little Feat's Dixie Chicken (Warner Brothers, 1972). In the studio, this recording was almost folksy, extending the acoustic experiment both The Rolling Stones and Led Zeppelin were employing in their recordings. But live, the song was a nuclear shuffle, propelled solely by the power of Hayward behind his kit. He poured a dozen traditions into an Erlenmeyer flask, gas on high.

I had the occasion to meet Hayward and have dinner with him after Little Feat appeared at The Wildwood Park for Performing Arts in Little Rock, Arkansas, in 2003. Little Rock native Fred Tackett (Hall High School classmate of former presidential candidate Retired Gen. Wesley Clark) had come home, bringing his band for a local fundraiser. Hayward was an unpretentious gentleman, ready with a quick smile and a quicker warm handshake when I posed him as a greater drummer than Rush's Neil Peart. He didn't need me to tell him that.

Hayward's sound was unmistakable; a New Orleans shuffle informed by the Great Midwest and Left Coast. His co-founder in Little Feat, Lowell George, was thinking of him when he penned: