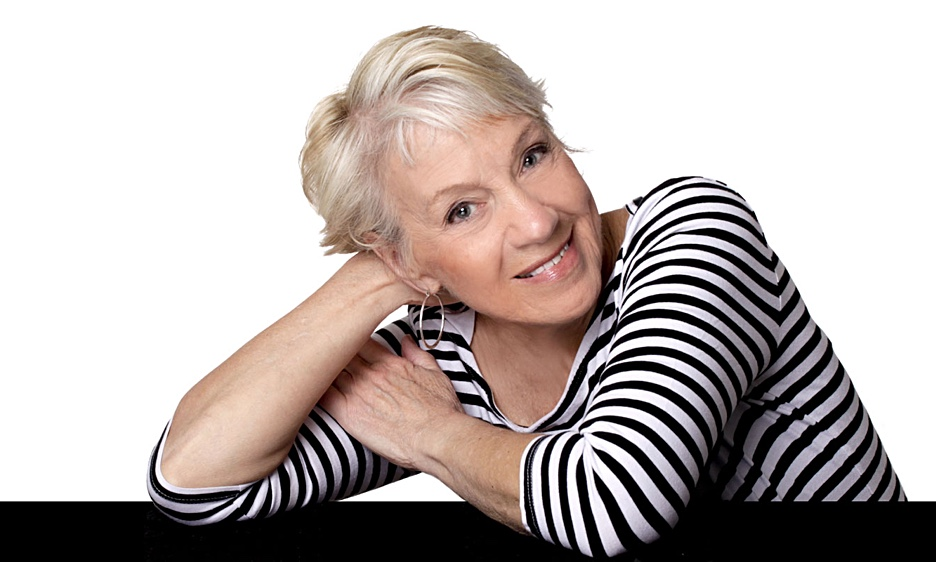 The name Rebecca Kilgore immediately conjures up thoughts about a singer who epitomizes superb taste in all aspects of her artistry. She chooses wonderful songs to sing, many of them too often ignored gems, her phrasing is sublime and her vocalizing rests easily on your ears.
—Joe Lang, Jersey Jazz

Jazz vocalist Rebecca Kilgore is one the most prolific recording and performing artists on the scene today. With 50 or so recording projects as a leader or co-leader, she is one of the most respected interpreters of the Great American Songbook. Based in Portland, OR, Kilgore has worked with many of the top jazz musicians in the Pacific Northwest and beyond.

Kilgore does not disappoint on her newest recording, The Rebecca Kilgore Trio – Vol. 1, which features pianist Randy Porter and bassist Tom Wakeling. Porter has performed with a host of jazz greats, including Freddie Hubbard, Art Farmer, Benny Golson, and Charles McPherson, among many others. Wakeling has worked with Arturo Sandoval, Lee Konitz, Mel Tormé, Benny Golson, James Moody, Herb Ellis, Mose Allison, Charlie Rouse, and Houston Person, to name just a few. Porter and Wakeling have accompanied Kilgore on other albums as well. Kilgore’s husband, Dick Titterington, also plays cornet on a couple of tunes.

Kilgore has a smooth, flexible voice that is a perfect fit for her repertoire. Her approach is lighthearted. She is never histrionic and eschews melisma and vocal pyrotechnics for a swinging, bluesy, conversational style that puts the lyrics and melody front and center.

Her singing has won her many accolades. An honoree of the Oregon Music Hall of Fame and Jazz Society of Oregon Hall of Fame, Kilgore was awarded the Portland Jazz Master Award in 2020 by PDX Jazz, the largest organization presenting jazz performances in the Pacific Northwest. She has also been a frequent guest on National Public Radio’s Fresh Air with Terry Gross and appeared on A Prairie Home Companion. She has performed with Michael Feinstein at Carnegie Hall and has been invited to perform at New York’s Mabel Mercer Cabaret Convention for three years at Town Hall and Lincoln Center. She was the guest of honor at the 2013 Roswell Jazz Festival, and she was honored as a Jazz Legend at the San Diego Jazz Party in 2016.

A native of Waltham, MA, Kilgore’s mother was an artist, and her father was the choir director at a Unitarian Church, so it is no wonder that she began singing at a very young age. When she was a senior in high school, singer/songwriters like Judy Collins and Joan Baez were very popular, and Kilgore began learning the guitar to sing and play their music. She travelled regularly to Boston to spend time hanging out in Harvard Square’s hip coffee houses. Her introduction to vocal jazz was on a local radio station that only broadcast Beatles music except for one program that featured jazz singers. It was the first time she really listened to singers like Ella and Billie, and their music resonated deeply with her, changing her musical direction.

When she was in college, Kilgore visited her sister in Portland. Kilgore fell in love with the city’s friendly vibe and vibrant downtown music scene, so she moved across the country. Her career as a performer began when a friend recommended her as a replacement singer and guitarist for a small swing ensemble called Wholly Cats. With a solid local following, the band played five nights a week at a local hot spot. Kilgore stayed with the band for four years, continuously learning swing tunes and developing her chops. The band eventually broke up, but Kilgore soon started her own band. The music scene was hopping, and she had plenty of opportunities to perform around the city with her own band and with other groups, as well.

Jazz parties were a fairly new phenomenon back then. At first, the parties were closed affairs hosted by music lovers who would invite several acts to perform before other musicians and a select audience. The parties began sprouting up all around the country, and Kilgore began getting invitations to perform, giving her the chance to meet and perform with many nationally known jazz musicians. One of the biggest jazz celebrations was The March of Jazz. Held in Clearwater Beach, Florida, for three days every March. The March of Jazz was run by the late Matt Domber, who also launched Arbors Records. Kilgore first appeared at The March of Jazz with her then Portland collaborator, Dave Frishberg, and trombonist, Dan Barrett. Kilgore and Barrett have recorded several CDs together and performed around the country and at many jazz events in Europe.

The trips to The March of Jazz led to Kilgore’s first album, I Saw Stars, in 1996 on Arbors Records. The album featured Dan Barrett’s band, which included Dave Frishberg and Bucky Pizzarelli. Kilgore wound up having a long association with Frishberg. They played together as a duo act for five years at a swanky Portland hotel, and Frishberg appeared on several of her albums.

Kilgore also met saxophonist Harry Allen at The March of Jazz, and the two also became frequent collaborators. They have recorded eight CDs together and have performed around the country. Their performance at Feinstein’s in 2011 was well reviewed in the New York Times, and an album documenting the live show, Live at Feinstein’s at Loews, was very well-received.

On The Rebecca Kilgore Trio – Vol. 1, Kilgore presents a program of mostly not-so-standard standards. She opens the album with “Dear Bix,” written by Dave Frishberg about an imagined conversation between Bix Beiderbecke and Hoagy Carmichael. Another tune off-the-beaten standards track is “Somebody Like You,” given to Kilgore by celebrated vocalist/songwriter Meredith D’Ambrosio. “I Wanna Get Married” is a tongue-in-cheek tune penned by Nellie McKay, the young singer/songwriter. “Because We’re Kids” was written for the 1953 film “The 5,000 Fingers of Dr. T” with lyrics by Dr. Seuss and music by Frederick Hollander. “Like the Brightest Star” was written by her friend Harry Allen. “Talking to Myself About You” was made famous by Peggy Lee. Kilgore, for the first time, wrote additional lyrics for the verse. Kilgore mined the Great American Songbook for songs like “Day In – Day Out,” “The Gentlemen is a Dope,” and “There’s a Small Hotel” to round out the selection.

The Rebecca Kilgore Trio – Vol. 1 is an album by artists at the top of their game. The eclectic mix of songs is compelling and unexpected, but all beautifully held together by Kilgore’s expressive vocals and the superb musicianship of Porter, Wakeling, and Titterington.