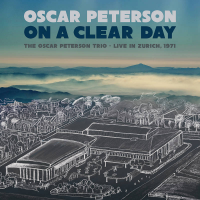 slideshow
Pianist Oscar Peterson had some year in 1971. He recorded Oscar Peterson in London (in March), In Tune with the Singers Unlimited (in July), Reunion Blues with the Milt Jackson Quartet (in July), In Concert (in July) and Great Connection (in October). What all of these albums have in common is they were recorded in Europe. Now we can add a sixth—On a Clear Day: Live in Zurich 1971 (Mack Avenue)—recorded on November 24, 1971 at Zurich's Kongresshaus, a complex of meeting spaces on Lake Zurich that includes the historic Tonhalle Zürich concert hall.

Accompanying Peterson in Zurich and on his entire six-week European tour were bassist Niels-Henning Ørsted Pedersen and drummer Louis Hayes. Previously unreleased, the music on the new album was recorded originally for a single broadcast on Radio Zurich. After airing, the tape went up on a shelf where it remained until now.

The songs performed are The Lamp Is Low, Younger Than Springtime, On a Clear Day, Young and Foolish / A Time for Love, Soft Winds, Mack the Knife, Where Do I Go From Here? and On the Trail.

Peterson's playing here ranges from terrific to sensational. While the early tracks lean toward pensive and rollicking (The Lamp Is Low, Younger Than Springtime, Young and Foolish and Soft Winds), his keyboard attack virtually explodes on On a Clear Day and the last three tracks—Mack the Knife, Where Do I Go From Here? and On the Trail. The drive and speed with which Peterson plays and his cascades of flawless improvisation is hair-raising. [Poster above for a concert on the same tour three days later in Geneva, Switzerland]

Mack the Knife is perhaps the show-stopper. You won't know what he's playing until 4:05, which must have been quite a surprise for an audience wondering what his lengthy introduction was building toward. A sharp ear can pick out where it's heading, but he did a wonderful job of disguising his intention. Another high point are Peterson's chords on Younger Than Springtime. An exhilarating album and a terrific find. We have Kelly Peterson, Oscar's wife and the album's producer, to thank.

And here's Mack the Knife...