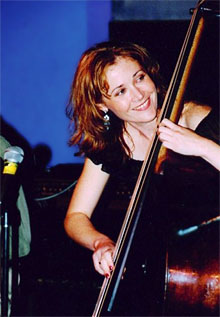 slideshow
On the last Wednesday night of the first month in the newly renovated bar musical director Gino Moratti announced a quiet policy intended to focus attention on the subtleties of Nicki Parrott’s Trio.

Moving from the second floor after six successful years to the first floor adjacent to the hotel in the former Park Avenue Rockefeller Townhouse, the official opening on the weekend of May 2nd, 2012, found it’s now called: JAZZ at Kitano. The mahogany walls, banquettes, skylights set in a 30-foot ceiling and a purposefully designed well-lit stage will be devoted solely to jazz every night of the week.

Nicki Parrott, a talented string bassist, who was chided into singing some time ago, displayed an impromptu approach on May 30th when she opened a capella on bass with “a riff borrowed from Ray Brown,” then explained, “you should always steal from the best." The trio, pianist John di Martino and Tim Warner’s drums, then backed her “Come Rain or Come Shine" withholding propriety in favor of brash swing. di Martino's feature, a bossa nova version of “Summer Wind," showed off his delicate improvisational skill as well as Ms. Parrott’s ability to capture the essence of Frank Sinata's famous version.

Recently the entrepreneur, producer Jon Hill gifted Nicki Parrott with his first recording session that surprisingly included a rather unique “When Your Lover Has Gone.” His enthusiasm at a St Peters Church Memorial for clarinetist Joe Muranyi prompted me to witness her first public performance because she learned the words just before that session. Hill explained that at the end of an extra hours session her tired voice affected a soft fatigued tone that Nikki approved after listening to six takes.

Later, nearing the end of the evening, she asked the audience for requests. The first response “Sophisticated Lady” included di Martino sticking to the melody all the way while adding his own improvised additions until he aggressively backed Nicki's romantic bass solo. “Softly in a Morning Sunrise followed, then as the encore Nikki opened “Sunny Side of the Street (in F) a capella and on her solo scatted noticeably happy and smiling.

This colorful room made focusing on the music and listening a pleasure not a distraction that will please any pure jazz fan.