With a new recording project, touring schedule, and new leadership, the New Orleans Jazz Orchestra is poised for success and committed to spreading our music around the world.
&#151Adonis Rose 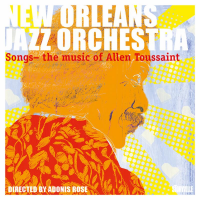 The renowned New Orleans Jazz Orchestra reflects on the wide-ranging influence of the Big Easy’s own Allen Toussaint, the legendary composer, singer, pianist, and producer, with the March 29 digital release of Songs: The Music of Allen Toussaint on Storyville Records (physical release is set for April 19). The album features six songs by Toussaint and one associated with him, as well as two original tribute pieces. It also marks the NOJO leadership debut of drummer/artistic director Adonis Rose, who assumed the mantle in 2016 to navigate the 18-piece orchestra out of the troubled waters surrounding its now-departed founder.

Toussaint, who passed away in 2015, left his deepest footprints in R&B and rock ’n’ roll. However, he was also a major figure in the development of New Orleans funk; resonated in country music (by way of Glen Campbell’s smash hit cover of “Southern Nights”); and, of course, was steeped in jazz. “[It] was in his blood,” Rose says. “There’s always some connection to jazz: When you’re from New Orleans, there’s no way around it.”

When frequent NOJO collaborator Dee Dee Bridgewater remarked that she’d never heard a big band take on Toussaint’s music, Rose was instantly inspired. “I said, ‘You know what? Yes. That’s a great idea. Let’s dig into this and make it happen!’” he says.

The results honor not only Toussaint, but the broader musical culture of his hometown. The iconic “Working in the Coal Mine” does not feature a singer, but the band members make New Orleans shouts out of its well-known lyrics. “Southern Nights” takes on a brass-band street groove, while “Java,” a Toussaint-penned 1963 instrumental hit for trumpeter Al Hirt, retains and even amplifies the original record’s raucous second-line feel. New Orleanian percussionist Gerald French contributes the original “Gert Town,” which he flavors with the music of Mardi Gras Indians.

Toussaint’s ballads get attention, too, with help from a powerhouse set of vocalists. Bridgewater brings her vitality to the beautiful “It’s Raining” and “With You in Mind,” the latter in a duet performance with New Orleans vocalist Philip Manuel. The rhythm & blues staple “Ruler of My Heart” takes on new majesty at the hands of Nayo Jones, NOJO’s house vocalist—and a newly swinging energy in its second half, thanks to Rose and the orchestra.

Adonis Rose was born January 11, 1975, in New Orleans, the scion of a musical family. He began playing drums at 3 years old, following in his father and grandfather’s footsteps, and as a teenager became enamored with the music of fellow New Orleanians Wynton and Branford Marsalis—with whose father, Ellis, Adonis studied at New Orleans Center for Creative Arts (NOCCA).

Rose won a prestigious presidential scholarship to Berklee College of Music in Boston; just afterward, however, Terence Blanchard called and invited him to tour. “So two days after my high school graduation I went out on the road with Terence. That was my first gig,” he recalls. He continued to get work with Betty Carter, Marlon Jordan, and the Lincoln Center Jazz Orchestra, ultimately dropping out of Berklee to go on the road and make a home in New Orleans.

In 2002, Rose became the founding drummer for the nonprofit, Grammy-winning New Orleans Jazz Orchestra (NOJO), the only institution in jazz’s birthplace that is committed solely to the music’s development. He maintained that position even after moving to Fort Worth, Texas, in the wake of Hurricane Katrina, where he taught at the University of Texas at Arlington and established the Fort Worth Jazz Orchestra. Rose moved back to the Crescent City in 2015, by which time NOJO was his steadiest gig—soon to be his full-time one.

For all its uplift of Allen Toussaint and of New Orleans, Songs is also a personal triumph for Rose. Following the controversial departure of founder Irvin Mayfield from NOJO and its subsequent loss of institutional support, he set himself to the fearsome task of rebuilding the orchestra while keeping its sterling musical reputation intact. He succeeded.

“Almost all of our shows since we started back have sold out,” he says. “All of the band members, every single last one of them, came back. The musicians who built this organization, put it on their backs night after night, those are the ones that are doing it again now, along with me.” Songs thus stands as a monument to Rose’s accomplishment.

The orchestra will be performing a CD release show at its home base, the New Orleans Jazz Market, on Fri. 3/29, with other shows at the same venue to follow on Fri. 5/3 (a tribute to Whitney Houston) and Thurs. 6/6 (a tribute to Prince). NOJO is scheduled to perform at the Exit Zero Jazz Festival, Cape May, NJ, 4/13; the New Orleans Jazz & Heritage Festival 4/28; the St. Lucia Jazz Festival (5/8-10, the NOJO 7, with guest vocalist Ledisi); the Ascona Jazz Festival, Switzerland (6/18-30, in various configurations); and the Detroit Jazz Festival 9/1 (with guest vocalist Dee Dee Bridgewater). NOJO will head to New York later this year for a two-night stand at Jazz at Lincoln Center’s Appel Room (12/13-14, with guest vocalist René Marie). Rose, who has also recently been performing with vocalist Kurt Elling’s band, is already planning future recording projects with the orchestra, including one with vocalist Ledisi and a Brazilian-themed album. “With a new recording project, touring schedule, and new leadership,” says Rose, “the New Orleans Jazz Orchestra is poised for success and committed to spreading our music around the world.”