Nat Cole: That Sunday, That Summer 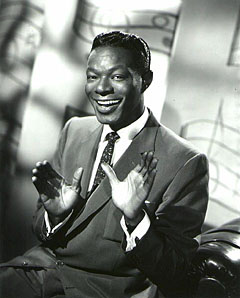 slideshow
Everyone has a favorite Nat King Cole song. Mine is That Sunday, That Summer. In addition to the song's melody being artfully crafted, the lyrics retain an old fashioned formality that's long gone. It's an unusual love song, in that it casts the singer as a reminiscing romantic singing to his wife or love interest about a special moment on a special day. It's both hip and delightfully square.

I also love Ralph Carmichael's arrangement, with the bass trombone hitting like a heartbeat and the choir adding just the right amount of confectionery accompaniment. Over the weekend I spoke to Dick LaPalm about the song. Dick is a legendary jazz and pop record promoter who worked closely with Cole to gain radio airplay for his many Capitol releases.

As we were talking, I said I thought the song was symbolically the last entry in the American songbook. Recorded in the spring of 1963, the song was released on the last day of August, hit the charts in September and reached No. 12 on November 2&#151before all hell broke loose. Dick laughed. “Don't even explain, I know exactly what you mean." Of course, within months, President Kennedy would be assassinated, the Beatles' I Want to Hold Your Hand would be released and a generation would pass.

Here's what Dick said about the song:

“Nat loved That Sunday, That Summer. He adored the melody and the lyrics. Joe Sherman wrote the music and George David Weiss wrote the words. George was amazing. He wrote the lyrics to Lullaby of Birdland, Too Close for Comfort and What a Wonderful World. Joe and his brother Noel wrote Ramblin' Rose, Graduation Day and so many others.

“I remember Joe came backstage to see Nathaniel while he was working the Latin Casino in Philadelphia. He didn't have a demo of That Sunday, That Summer, just sheet music. Nat could read music, of course, so he just read it down. He thought the song was interesting.

“As you know, Nat always brought excellent taste and intelligence to the songs he sang along with tremendous polish. Part of the reason for this was the amount of thought he gave to a song's words. When he found a song that interested him, he'd have Charlotte, his assistant, type up the lyrics on 3 x 5 cards. Just the lyrics, and one or two lines per card.

“He'd keep these cards in his jacket pocket, and whenever he had time, he'd take out a card and study the words. For Nat, the lyrics had to move him, and this was his way of savoring them, putting them to the test.

“He did that on so many songs. I remember back in 1958, in St. Louis, we were taking a cab somewhere and he reached into his pocket, pulled out a card or two and smiled. He showed me a couple of them. On the cards were the words...

“I asked him who wrote the lyrics. He said Gordon Jenkins [pictured]. The song, of course, was This Is All I Ask, which he was about to record with Gordon for the album The Very Thought of You.

“My job was to get the single played, which wasn't too hard since radio guys adored it. Art Pallan [pictured] was a disc jokey at KDKA in Pittsburgh. He jumped all over it first and helped break it. KDKA was a strong, 50,000-watt station, and Pallan began to bang it pretty heavily. Then Joey Reynolds at WKBW in Buffalo played it, followed by Wally Phillips on WGN in Chicago and William B. Williams on WNEW in New York. The song hit the Billboard pop chart in September and peaked at No. 12 that fall.

“If Nathaniel liked a song, he'd do it in his show. He sang That Sunday, That Summer for about a year after the recording. And you're right: Everything did change after that song."

JazzWax track: That Sunday, That Summer can be found remastered on many recent Nat King Cole compilations. It was first released on Those Lazy, Hazy, Crazy Days of Summer here.