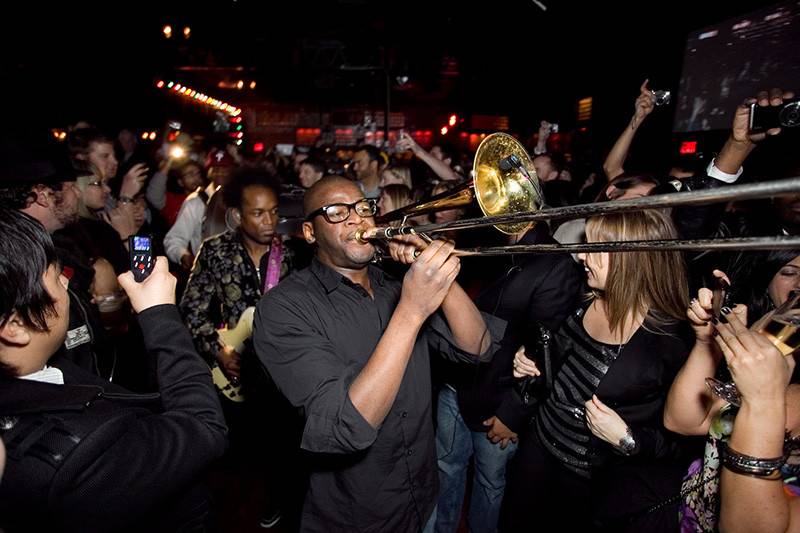 slideshow
From humble beginnings to headlining Philadelphia and New York City clubs, Ernest Stuart is a multi-talented trombonist who's played alongside The Duke Ellington Orchestra, Branford Marsalis, Billy Paul, The O'Jays, Charles Tolliver Big Band and Darcy James Argue, among others. Stuart's heavily awaited debut CD, Solitary Walker, rolls out nationally on March 15, 2011 at a SRP of $15.00 and is also available as a digital download at www.erneststuart.com.

Leading up to the release of Solitary Walker, Stuart had made a name for himself as a gifted trombonist who shared the stage with legendary musicians such as The Duke Ellington Orchestra, The Village Vanguard Jazz Orchestra, Reggie Workman, Terrell Stafford and Anthony Wonsey, among others. An ardent fan following has watched his performances in New York City clubs such as Smalls, The Village Vanguard, The Blue Note, The Kitana Hotel, Smoke, Dizzy's, Le Poisson Rouge, The Jazz Gallery and The Iridium, among others. Back home in Philadelphia he performed at Ortliebs, Chris,' World Café Live, Warmdaddy's, Relish, Zanzibar Blue, Time, The Clef Cub, The Kimmel Center and The Rotunda, among others.

Solitary Walker came about when twenty-seven-year-old, Philadelphia native, Stuart wanted to create music that was a true reflection of himself and his musical experiences which ranged from gigs with The Roots to The Village Vanguard Jazz Orchestra. During the production of Solitary Walker, he set out to capture an honesty he often feels is lacking in many over-produced jazz albums. He felt the over-use of technology to erase “mistakes" can leave an album without character. Solitary Walker boasts a slight rawness from the use of acoustic instruments and as few microphones as possible (the horns share one microphone as well). In keeping with his vision of honesty, the listener is drawn into the album's sound and sophistication unpretentiously.

“The events, not just the music in my life have contributed to the albums creation," said Stuart.

The CD title Solitary Walker comes from the book Reveries of the Solitary Walker written by French philosopher Jean-Jacques Rousseau. Stuart discovered the book during a somewhat tumultuous time while living in New York City. The book's theme resonated deeply with him, though his “exile" was totally self imposed. He learned a lot about himself during this relatively short period, but also about the nature of ordinary people, music and musicians. Once he recorded the CD he knew the title had to be Solitary Walker, to commemorate his experiences during this special period in his life.

Stuart's road to stardom can be traced to his love of music when, at the age of 12, he wanted to play the saxophone. His dream came to a halt when his mother, a single parent of two, could not afford to buy Stuart the instrument. To avoid being kicked out of beginner's music class, Ernest was given three options: to play the tuba, baritone horn or trombone. He picked the trombone and never looked back.

“Once I made it to Temple I began to study with Luis Bonilla. This changed my life. He, in all of his exuberance, came in and set me on a path of musical discovery and maturation that was fueled by his refusal to accept anything less than my best," said Stuart.

During his undergraduate studies Stuart began to make a name for himself around Philadelphia as a versatile trombonist, playing various styles of music from jazz, salsa, r&b, and neo-soul to hip-hop.

The one constant that kept his musical dreams alive was his mother, Delsie Stuart. Life was not ideal growing up. Even during a rough childhood that included being evicted from their apartment and having to stay in sleazy motels, his mother, as if everything was normal in their lives, still made them go to school. Delsie instilled toughness in her children the best way a single mother of two could. Solitary Walker is dedicated to Delsie Stuart, a nurturing, caring, strong woman who only wanted the best for her children.

Stuart continues to tour and play in clubs in Philadelphia and New York.