Miles: The Companion Guide to the Autobiography, Final Cover Reveal 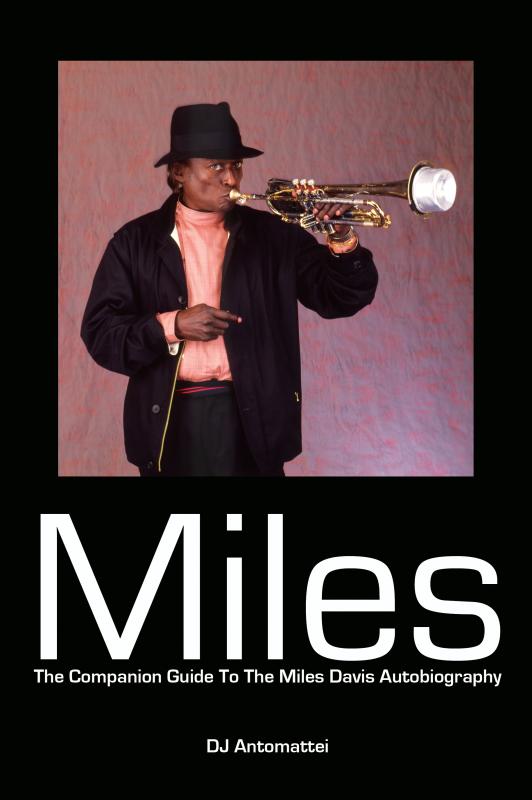 slideshow
Last month on Halloween day, All About Jazz was exclusively the first jazz website to break the news about a new Miles Davis book (Miles: The Companion Guide to the Autobiography) currently in the works by Marc Antomattei Press. At that time the author shared a brief synopsis about the book with AAJ. The short news release was one of the most read and shared news articles during the month of November. About a month later on Thanksgiving Day we bring you more extensive information about the making of the book, as well as reveal the book's final cover. For the initial news story from October 31, you can find it here.

The author DJ Antomattei had more to share about the book this month. “Last month when I broke the news about my new book project, the cover of the book wasn't finished yet. I was still in the process of trying to license the photo, which I have done now. In trying to keep with the same look as the autobiography, I decided to license a photo from the same photographer Gilles Larrain, he took that great shot that was featured on the front of Miles' album Decoy, the poster for The Black Music Association's: A Tribute to an American Music Legend event in 1983, and then used for the cover of Miles: The Autobiography in 1989. Later another Gilles' photo was used for the Miles Davis album Aura.

I didn't want to use the same photo as on the autobiography for legal reasons and because it is a different book, so I picked out something that was taken during that same photo session. There was another great image of Miles that potentially I could have used, of him wearing a yellow shirt and black vest. Ultimately I chose the one of him in a pink shirt because unlike my alternate choice, he has his trumpet in hand and this book is all about the man and his music."

In discussing the making of the book Antomattei talks about the length of the book, which has been extended dramatically from its initial concept. “After completing my introduction along with the core writing of the book, I found that I only had thirty pages of material. Thirty pages are not very much and so the book appeared as though when it's printed, it wouldn't be worth the value of the paper it's printed on. So many books have been written about Miles Davis before; I really had to think of what I could write about to extend the book with subject matter that was new and innovative. Then the idea hit me to make a lot of good supplemental material that's not just filler, but valuable writing. Once I started doing this, it was really hard for me to stop writing. I had to think where's the stopping point going to be at for me. Now I'm pleased to say I have doubled my page count with quality material. The buyers guide section to DVDs, special edition albums, and the album appraisal guide is something I think the potential readers should be excited about."

Antomattei left AAJ with his closing words. “Wow, I can't believe I am nearing the finish line. I had the idea for this book floating around in my head for two years, and I've been working on it for the past six months. It's still about another three months out before the final release of the book and I already got ideas for the next one. That next one would make a great follow up. With that said though, I think I should focus on getting this one out first safely and successfully.

Also a quick interlude note for any personnel working in the film or music industry that may come across this. So I hear work is being put in now for that long awaited Miles Davis biopic with Don Cheadle. I myself would actually like to be apart of that. I have too much knowledge and am too good a writer to go to waste. I feel as though I should be writing a treatment for this. If anyone is in the know and have contacts with either the Miles Davis estate or the screenwriter Steven Baigelman, definitely be sure to drop me a line here."

Miles: The Companion Guide to the Autobiography is currently scheduled for a February 2011 release date.