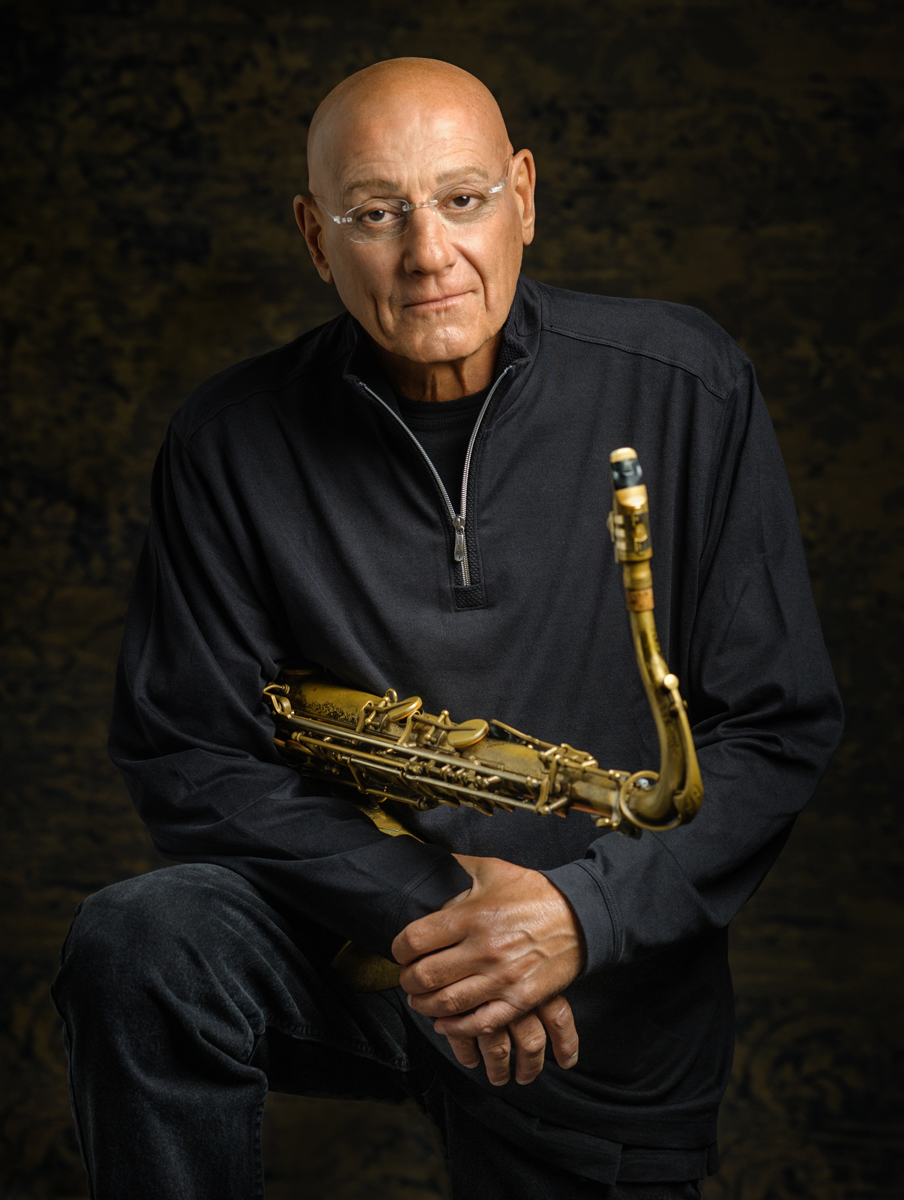 slideshow
Jazz artists who maintain the highest standards of the classic tradition should remind the listener of the best of the past, while presenting their own musical visions in an original and compelling fashion. For those who agree with this, Everything Starts Now by the outstanding tenor saxophonist Michael Pedicin's Quintet will truly be a revelation. As a tenor saxophonist, this 60-year old master has a sound that is entirely his own, evolved through the grand tradition, and as organic and visceral as the horn can produce. Dividing his time for the past 20 years between leading his own group on the rich Philadelphia music scene, touring with major names like Dave Brubeck, Stanley Clarke and Pat Martino, recording and performing with popular icons like Frank Sinatra and Stevie Wonder and pursuing a Ph.D. in psychology, Pedicin has now established a quintet that is powerfully focused upon creating exciting, uncompromising and utterly musical Jazz in the purest tradition.

Although the group has only been intact as a unit for a little over one year, the interplay and unity is that of a long-established ensemble. This can be partially attributed to its members' - guitarist Johnny Valentino, pianist Mick Rossi, bassist Chris Colangelo and drummer Michael Sarin - extensive experiences performing together for many years on other projects. However, the primary reason for this powerful synergy is that Pedicin's musical vision allows and demands that each player bring everything they are to the music while still serving the overall plan of the leader. This concept is no better exemplified than in the music of the unparalleled master, John Coltrane, who has profoundly influenced Michael both as an artist and in his practice as a psychologist specializing in the area of creativity.

With one exception, Everything Starts Now showcases the remarkable composing talents of Johnny Valentino. Original, highly melodic and perfectly structured for the adventurous and dynamic improvisations of the group, his nine compositions cover the gamut from breathtakingly beautiful ballads to driving romps. The single other piece is Eric Bazilian's soulful lament, “One of Us," originally performed by vocalist Joan Osborne, which receives a Gospel-ish treatment that gives its exquisitely painful melody an uplifting elegance.

Pedicin's approach to the ballad form will be an absolute delight to listeners who crave the classic approach of masters like Dexter, Hawkins, Young and Webster. On the breathtakingly beautiful “Another Day," Michael paints in broad strokes, his big, muscular tone expressing the melody and its variations with unabashed lyricism and heartfelt passion and maturity, leaving the harmonics and pyrotechnics that are too prevalent today in the dust of its sheer beauty. The ballad form is flirted with again on After the Rainbow Is Over, a gently cascading piece with a lovely melody and emotional lyricism, but with a certain driving edge that puts it more into the zone of “Maiden Voyage" - in essence, a ballad that burns.

In similar fashion, the refreshingly inventive approach in Valentino's composing and arranging (he also handled all of the arranging on the CD) defies simple categorization, and the arrangements offer a great deal of options and context for exploration. The tough modal blues “L.A. to Philly" utilizes an edgy ostinato reminiscent of Trane's classic “Tunji" with a swirling vertically structured theme, laying the groundwork for soulfully virile tenor, edgily percussive and tension-filled guitar, and Gospel-tinged piano. A gently freewheeling collective improv kicks in after the out theme - a device that also works most effectively on “This Way Out," a jaunty and angular, somewhat exotic piece built on a percussive thrust that moves freely within Afro-Caribbean and Middle Eastern rhythms.

A samba with bite might best describe “Pelican," which opens the album and sets the tone quite nicely, luring in the listener with its enticingly lilting melody while gently revealing the adventurous exploration and emotional intensity that is front and center throughout the album. “Concatenation," with a playfully jagged and quirky melodic line, launches a blazing tenor solo stoked by powerful block chord piano comping and a piano solo that touches on the vernacular expanded by Jaki Byard and early Cecil Taylor.

A straightforward march tempo, joined by an infectious, darkly wooded bass line, followed by guitar and piano figures sets up the vertical melodic line of “Contours," launching a sinuous, exciting guitar solo, darkly weaving piano and richly lyrical tenor. Maintaining the seemingly contradictory pattern of category. “Later" is best described as a controlled scorcher. Built on a relentlessly driving groove while projecting an air of easy swing, a percolating intensity allows Pedicin to fire up an articulately forceful solo that builds the tension for another of Valentino's edgily angular offerings and a brilliant piano solo by Rossi of blazing single note runs, concluding with explosive, two-fisted block chords. The airily free suspended lyricism of the gently probing title cut closes this stunning album, making one wonder exactly what Everything Starts Now will actually foretell.

Blending selflessness and individuality, virtuosity and straightforward musicality, total accessibility and adventurous exploration, splendid interplay and palpably exciting solo excursions, the Michael Pedicin Quintet has created a brilliant work of art in the purest context of the classic Jazz tradition. These artists wear their passion, maturity and musicality proudly, without falling back on virtuosity for its own sake, and never for even a moment allowing the music and its message to take a back seat to it.

The Jazz Hut label takes a highly innovative approach of revenue sharing and artist empowerment, designed to thrive within the new business environment offered by technology and internet marketing, alongside the standard business mechanisms common to the industry.

Everything Starts Now is the beginning of a new wave for Michael Pedicin. After spending years in an integrated realm of musical and professional activity, Michael has emerged with an album worthy of serious, yet very accessible listening. Michael and co-producer/composer/arranger Johnnie Valentino have enlisted a group of very talented, young, and incredibly synchronous players in a project that took shape during Michael's frequent visits to California, where he developed a beautifully productive musical relationship with Valentino. The result is an album of beautifully constructed jazz with an urgent pull luring the listener in... always with a welcoming groove.

For those who don't yet know Michael, he began his career as a young saxophonist in Philadelphia, being mentioned in Downbeat Magazine as “the most exciting soloist in the entire three day jazz festival." Following those early college years, Michael began a ten year stint with Gamble and Huff's Philadelphia International Records as a busy studio musician and touring saxophonist with The O'Jays, David Bowie, Lou Rawls, Stevie Wonder, MFSB, and many other acts that felt compelled to record at the famous Sigma Sound Studios.

Never content with a one -dimensional life style, Michael went on to pursue a few other challenges that he felt necessary for his life and music. A Ph.D. in Cognitive and Creative Arts Psychology, an honorary doctorate from Combs College of Music, and two illustrious teaching positions (University Of The Arts/Philadelphia; Temple University/Philadelphia weren't enough to keep him from his other jobs as tenor saxophonist with Maynard Ferguson; Dave Brubeck ("Michael Pedicin tempered the soft focus lyricism that the Brubeck Quartet's saxophone chair has demanded with some discreet John Coltrane devices and an attractive sense of spacing and drama"...The New York Times); Stanley Clarke; and, Pat Martino ("Tenor saxophonist Michael Pedicin responded to Martino's musical challenges with brawny-toned, aggressively virtuosic solos deeply influenced by John Coltrane"/Don Heckman of the Los Angeles Times).

As a tenor saxophonist, this veteran has a sound that is entirely his own, evolved through the grand tradition, and as organic and visceral as the horn can produce. Pedicin has now established a quintet that is powerfully focused upon creating exciting, uncompromising and utterly musical jazz in the purest tradition.