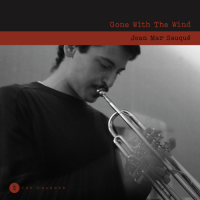 slideshow
Let me start off by saying you're about to be turned on to an exceptional trumpet player. If you already know Joan Mar Sauqué, then you know what I'm talking about. If not, you can thank me later, after you say “Oh, wow."

A bunch of weeks ago, Joan Mar Sauqué sent along an email with an invitation to check out his latest album, Gone With the Wind (The Changes). The album features Joan on trumpet, Josep Traver on guitar and Giuseppe Campisi on bass. When I gave a listen, I was struck by Joan's romantic phrasing and passion for harmony. The sound was similar in many ways to Chet Baker—delicate and romantic.

The album's song choices are smart: Thad Jones's Bitty Ditty, Tadd Dameron and Harlan Leonard's My Dream, Ray Brown and Dizzy Gillespies Ray's Idea, the standard I Only Have Eyes For You, Gillespie's In the Land Of Oo-Bla-Dee, the standards I Cover The Waterfront and Gone With The Wind, Dameron's Kitchenette Across the Hall, Bill from Showboat, Gigi Gryce's Shabozz and Strictly Romantic, and the standard Stompin' at the Savoy.

Joan (above) has a fine understanding of each song, having clearly researched different versions. You can hear the comprehension in his feel. His blowing is loving and sympathetic, and he curls around each melody as if dancing with the songs. Even on Shabozz, which requires just the right feel, the arrangement is spot on. You can't fake these songs. Either you're familiar with how to swing them or you bomb. Joan triumphs throughout. The same goes for Traver on guitar and Campisi on bass. The feel and taste level are perfect. You'll find the album here.

Recently, I had a chance to connect with Joan by email:

JazzWax: Where did you grow up?

Joan Mar Sauqué: I was born January 18, 1996 in a tiny village in North Catalonia, Spain, called Garrigoles, which has only 100 inhabitants. My mother was the music teacher in a local primary school. She studied piano but never worked as a musician. My father used to work as a captain on ships but doesn't play an instrument. He studied art history and has spent many hours listening to music and reading about music history. While neither of my parents listened to jazz, there was an orphaned album at home by Dizzy Gillespie that someone had bought for them. It became my introduction to jazz. I moved to Barcelona when I was 16.

JW: How did you come to study the trumpet?

JMS: I started on the trombone because we had one at home. But I was 7 and my arms weren't long enough, so I switched to trumpet. That trombone had been at my grandparents' house. My grandfather worked as an antiquarian, so he had some old instruments. When I was a kid, I spent time blowing old cornets and that trombone.

JW: Who did you study with?

JMS: In Barcelona, I studied trumpet with David Pastor (Taller de Musics), Matthew Simon (jazz ESMUC) and Mireia Farrés (classical ESMUC). I also met Terell Stafford, Joe Magnarelli, Gustavo Bergalli and Jeremy Pelt. But my main influence has been the Sant Andreu Jazz Band, which is a big band led by multi-instrumentalist and arranger Joan Chamorro. He combines education with gigs and recordings with great players, like Dick Oatts, Scott Robinson, Scott Hamilton, John Allred, Perico Sambeat, Joel Frahm and Joe Magnarelli. In the program, I met some of my best musical colleagues and friends. I grew up with other young Barcelona players like Andrea Motis, Joan Codina, Rita Payés, Magalí Datzira and Marçal Perramon.

JW: Who were your influences?

JMS: I feel I've been influenced by musicians who have a lyrical approach to music. The list includes Clifford Brown, Don Byas, Tadd Dameron, Mary Lou Williams, Gigi Gryce, Chet Baker, Charlie Parker and Gerry Mulligan. João Gilberto, too. Gilberto is one of my favorite Brazilian artists. When I listen to music, I focus on melody and phrasing, as well as its relation with harmony. Phrasing depends on rhythmic sense, and vice versa.

JW: Why does Barcelona have such a thriving jazz community?

JMS: There are many jazz musicians in Barcelona who have started young. The number has increased significantly during the last decade. Barcelona has three music conservatoires with jazz programs—ESMUC, Taller de Músics and Conservatori del Liceu. These programs have brought many young players from Catalonia and Spain to the city, so they have helped develop a bigger scene.

JW: Has the pandemic hurt the programs?

JMS: Before the virus, there were jam sessions every day. Now it's hard to find places to play regular gigs in the city. Most of the musicians often play outside of the city with several different bands to make a living. There aren't many stable bands playing now, and that's a pity. But not only in Barcelona, it's the same in all the country. Valencia, Málaga, Mallorca, Sevilla, Donosti, and Madrid have their own musicians and schools with great players. During the pandemic the situation has been really hard for jazz musicians. Now you're allowed to play some gigs, but there are not so many venues planning concerts. So, musicians' livelihoods depend on teaching. But despite this tough situation, some musicians are working on new projects with energy. I hope to keep my trio together and establish us as my main activity.

JW: Tell me about your latest album, Gone With the Wind?

JMS: We recorded compositions in the trio format—with guitar and bass. Most of the songs were composed by modern musicians from the 1940s and ‘50s, like Tadd Dameron, Gigi Gryce and Thad Jones. I decided to record these tunes because of the feel. First comes the melody, then the harmony. I don't like thinking about harmony divorced from melody. They are together. Melody can be very dramatic if harmony has been crafted to offset the melody. Dameron and Benny Golson are great composers in this sense. Harmony always helps melody. So, I decided to create an album following this concept. I'm happy that we recorded tunes that are rarely recorded, such as Strictly Romantic, Shabozz, Kitchenette Across the Hall and My Dream. These are clear examples of the musical conception I had in mind.

Here's Joan playing Polka Dots and Moonbeams in 2016, with Joan Chamorro on bass...

And here's the Joan Mar Sauqué Trio playing live last year at the Barcelona Jazz Festival. They covered nearly the entire album and more, including Dig. And if I'm not mistaken, that's Joan Anton Cararach announcing the group at the very start. I miss Barcelona...