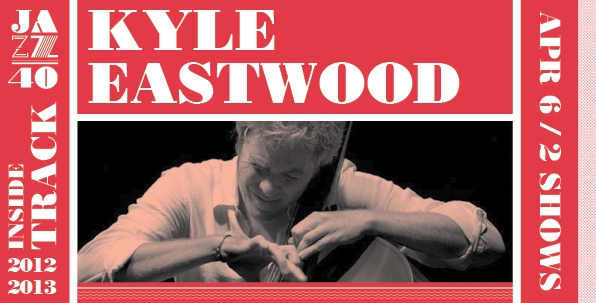 slideshow
Columbus, OH – As part of national Jazz Appreciation Month, the Jazz Arts Group of Columbus (JAG) will host its Inside Track season finale on Saturday, April 6 at both a familiar and not-so-familiar venue, the historic Garden Theatre (now managed by Short North Stage). First opened in 1920 as a vaudeville and silent movie theatre, the Garden Theatre's Green Room will be transformed into an intimate jazz cabaret for virtuoso bassist and composer Kyle Eastwood.

Today, Kyle Eastwood is less and less known as the son of Clint Eastwood and more of a universally respected musician and leader in his own right. A virtuoso bassist on electric and upright, as well as a talented composer with a keen ear for great tunes as well as the subtleties of modern jazz, he is right at the forefront of the contemporary scene. In addition to his six solo albums, Eastwood has also contributed music to eight of his father's films: The Rookie (1990), Mystic River (2002), Million Dollar Baby (2004), Flags of Our Fathers (2006), Letters from Iwo Jima (2006), Changeling (2008), Gran Torino (2008) and Invictus (2009). And while he takes pride in those credits, his most personal, fully realized and rewarding project to date is his current quintet offering, The View from Here.

It has been 15 years since Eastwood burst onto the jazz scene with his 1998 debut, From There To Here. At that moment in his budding career, the press seemed more preoccupied with his paternal lineage than his music. Over the course of the four subsequent releases – 2004's Paris Blue, 2005's Now, 2009's Metropolitan and 2011's Songs from the Chateau – Eastwood built up an impressive body of work while earning respect in musician circles. With his sixth release as a leader, The View from Here on the JazzVillage label, he demonstrates a strong command of both electric and upright basses while expanding into more adventurous territory that is informed as much by jazz as it is by world music. “I've always loved music from other countries," says the Carmel, California native who has resided in Paris for the past eight years. “Living in France, you hear a lot of North African and Middle Eastern music, and you can hear some of those influences on this new recording."

Accompanied by a London-based crew of stellar young musicians worthy of wide recognition — pianist Andrew McCormack, tenor saxophonist Graeme Blevins, trumpeter Quentin Collins and drummer Martyn Kaine — Eastwood and company blend infectious grooves and outstanding improvisations throughout eleven diverse tracks on The View from Here. “They're all really talented players," says Eastwood, “and we've been playing together for a while now, developing a real band chemistry. We ended up writing a lot of these new tunes together either at rehearsals or out on the road during last year's tour around Europe. Sometimes I would come up with a couple of ideas or Andrew might bring something in, then everybody would just add on to it after that."

Advance tickets are on sale now for $20 (general admission) and available online at www.jazzartsgroup.org and www.shortnorthstage.org. Due to limited seating, two separate performances are scheduled to begin at 7:00 PM and 10:00 PM.

The Inside Track music series is presented by Sequent with ongoing support from the Greater Columbus Arts Council, The Columbus Foundation, the Ohio Arts Council, and The Westin Columbus. Media support is provided by The Columbus Dispatch, Columbus Alive, and WCBE 90.5 FM.

The Jazz Arts Group of Columbus (JAG) is America's oldest not-for-profit arts organization dedicated to producing, performing and promoting jazz. JAG is the third largest performing arts organization in Columbus and consists of four focus areas: the Columbus Jazz Orchestra (CJO), one of the world's finest professional jazz orchestras; the Jazz Academy, JAG's extensive instructional programs educating both students and adults about jazz and American music; Inside Track, a jazz and blues performance series produced at the historic Lincoln Theatre and beyond; and Affiliate Musicians, a program providing employment opportunities for professional musicians.

The Smithsonian's National Museum of American History will mark the 12th annual Jazz Appreciation Month (JAM) in April with a month-long celebration of jazz featuring performances, talks, tours and family-oriented events. The museum launched JAM in 2001 as an annual event that pays tribute to jazz both as a historic and living American art form. It has since grown to include celebrations in all 50 states and 40 other countries. The Spirit and Rhythms of Jazz is the 2013 JAM theme highlighting jazz cultural history, musical performance and stories, programs and productions this April. JAM and UNESCO's International Jazz Day April 30 provide rich platforms for individuals and communities to explore jazz principles of freedom, inclusion and creativity to learn how jazz has transformed America and inspired the world.