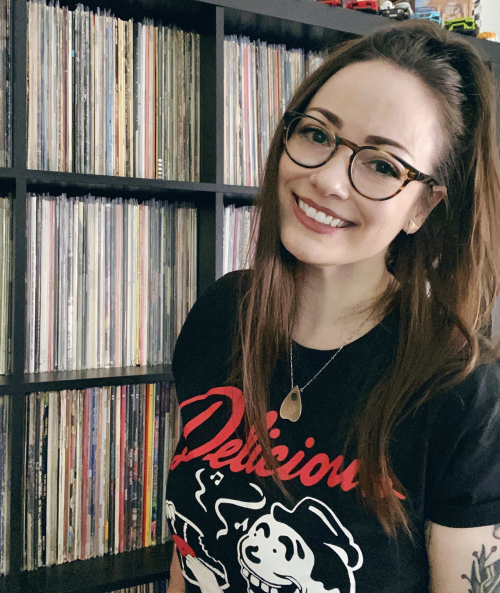 Over the weekend, my piece on the surging popularity of vinyl records among millennials (those born between 1981 and 1996) ran in The Wall Street Journal's Review section. Amazingly, new LPs last year surpassed the CDs and digital downloads in units sold. What I also found during my reporting is that millennials, who were especially hard hit emotionally during the pandemic, found serenity in vinyl albums. As I wrote in my piece: “Stressed out by fears of climate change, political strife and pandemic variants, a growing number of younger adults have been spending more time nesting and seeking refuge in their past. Many have fond childhood memories of parents playing vinyl albums in the 1980s and early 1990s, and they yearn to regain that feeling of security."

What I also uncovered during my interviews is that female millennials are playing a major role in vinyl's resurgence. Which was mind-blowing. During the peak of my own vinyl craze in the 1970s, LPs and stereo systems were the turf of guys, who could set up and break down stereos in a snap and knew all the major manufacturers of speakers, amps, turntables, tone arms and cartridges. Plenty of women listened to LPs back then, too, of course, but they weren't nearly as nerdy or fussy about their playback gear. They just wanted something—anything—to play their records on in apartments and dorm rooms. Guys veered toward volume power and speaker size. While reporting my article, I was surprised to learn how many female millennials today are vinyl fanatics.

One of the women I interviewed was Jenn D'Eugenio, 38, sales and customer experience manager at Furnace Record Pressing in Alexandria, Va. She also is founder and curator of Women in Vinyl, a nonprofit group that empowers and informs girls and women about career opportunities in the vinyl record business.

Here's what she told me:

Marc Myers: When and how did you fall in love with vinyl?

Jenn D'Eugenio: I've collected records for over 20 years. My parents had records when I was growing up. I found them fascinating—the cover art and records' tactile nature. In college, I studied design, and friends and I went to used-record stores. There was so much history there. Music has been so important to me but, for some time, I didn’t think I could do anything for a living with my passion because I wasn't a musician.

MM: When did you start Women in Vinyl?

JD'E: In 2018, when I started to notice that many bands and people I worked with turned to me with questions about vinyl recordings and bands. In general, women don't tend to gravitate to science, engineering and math. I wanted to start a group that made girls and women aware that there's a place for them in the record-making business. Last year, Women in Vinyl reached nonprofit status. We have a board and we offer scholarships. Anyone can make donations (here) to support what we do. We also have the Women in Vinyl Podcast with a new discussion every two weeks.

MM: What’s so emotionally exciting about vinyl for you?

JD'E: Digital downloads are impersonal and metallic sounding. A record is more personal. You can touch the manufacturing process, set it on a turntable platter and put the needle on and listen to the music embedded in the groves. It's a fascinating when you think about it. The vinyl album is sensory and strangely calming. I had always suffered from health anxieties, from the time I was a child. I feared coming down with a disease and dying. So the pandemic was a nightmare for me. Records helped me deal. I'm still not over the fear and still wear a mask to be cautious. Being home and connecting with my record collection was a distraction. Normally, I'd be out at stores searching for my next purchases. Spending more time at home rather than being out socializing was a drag, but it forced me to revisit a lot of records in my collection rather than just add to them.

MM: The pandemic must have been particularly rough on you given your job.

JD'E: I worked from home for a period, but records can’t be pressed in your home office. Even after I returned to work, I loved coming home to my records. I started focusing on consuming and appreciating. My husband is a record collector, too. We bought our house because it had space for our collection. We have 4,000 albums between us. He likes experimental jazz and hip-hip. I like the metal rock.

MM: Did vinyl records also keep your spirits up during the pandemic?

JD'E: Yes, they kept me thinking positive. I turned off the news. Even though a lot of what I commonly listen to isn’t necessarily upbeat, the vinyl format gave me a lift. I began listening to my records in alphabetical order and made it through to the letter M. Black Sabbath makes up a good chunk of my collection. I have 50 copies of Maser of Reality (1971), the band's third studio album. I really got into how each of these pressings were made.

MM: Do other millennials feel the same way you do about vinyl's restorative powers?

JD'E: Definitely. That’s part of the uptick. Millennials are into it. Records are a personal experience. You see and feel it. Used albums, in particular, take you back in time.

MM: Why have women gravitated to vinyl?

JD'E: Women love social media. They're especially good at forming relationships and communicating online. Vinyl united like-minded women, especially while stuck at home. Which was tricky. A lot of millennial women have a hard time sharing music on social media platforms like Instagram. When they put themselves out there, they found a lot of men resented them for getting so many likes and attention online. Some began trolling them. It's not only creepy and scary but drives women to stay off social media. That's why I started Women in Vinyl, to empower women and let them know there's a universe of women out there in the business that they can bond with. I also never understood why records and gear became a guy thing. Women have the same level of passion for recorded music. It just wasn't acceptable as a female thing for a long time, until women found their online voice.

MM: Is vinyl something you think will stay with women after the pandemic passes? Or will the desire disappear as women age and other things become a priority?

JD'E: It’s here to stay. Once you get the vinyl bug you can’t get rid of it. It's not a male or female thing. It's a human thing. Once you consume and absorb music that way, you become accustomed to the warmer sound and being part of the process. It's cool. Let's face it, if you want to own music, you can’t own streaming. It's like the wind. For soulful listening, vinyl is the best format. Once you place a turntable's needle on a vinyl record, you're hooked. Millennials will always want a soulful listening experience for artists they care about. And if some women—or men—outgrow vinyl, so what? You can always store them away and give them to your kids when they grow up.