The process [of making 'Soul Fingers'] was so different than other records I've done. I was hearing horns and a bunch of different textures, so at some point I said, 'I need help with this one.' I immediately thought of Steve [Jordan as producer] because of the soul music sound I was feeling. 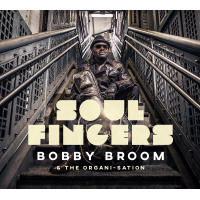 slideshow
Virtuoso Chicago-based guitarist Bobby Broom has always embraced the rhythm and blues core of jazz music. On Soul Fingers, his 12th album as a leader and first with his new trio Organi-Sation, Broom mines the rich repository of ’60s and ’70s pop music, offering inspired versions of hits by the Beatles, Procol Harum, Steely Dan, and Seals & Crofts, among others. Set for October 12 release by MRI Entertainment, the recording was produced by legendary drummer Steve Jordan.

Broom, a contemporary link to the illustrious lineage of jazz guitarists like Wes Montgomery, Kenny Burrell, Grant Green, George Benson, and Pat Martino, is no stranger to covering standards and pop hits: On his 2001 release Stand! he delivered hard-bop versions of songs by artists such as the Turtles, the Mamas & the Papas, and Sly & The Family Stone. And the Deep Blue Organ Trio, which Broom co-led from 2000 to 2013, released Wonderful!, a collection of Stevie Wonder songs, in 2011. Three years later came Broom’s My Shining Hour, a set of standards.

While developing Soul Fingers, Broom realized the ideas he was coming up with required the help of an outside producer. “The process was so different than other records I’ve done,” he says. “I got more involved in its preproduction. I was hearing horns and a bunch of different textures, so at some point I said, ‘I need help with this one.’ I immediately thought of Steve because of the soul music sound I was feeling.”

Broom and Jordan played together with Sonny Rollins once in the early ’80s and again during 2005, when both were members of the saxophone colossus’s band. “I thought he’d be perfect,” says Broom, “although it was basically a daydream,” referring to Jordan’s busy schedule with the likes of John Mayer and Keith Richards. Nevertheless “I emailed him and it took him less than an hour to get back to me with, ‘Let’s go!’” In addition to producing and sharing arranging credits, Jordan plays drums on “Get Ready” and “Eyes of Faith,” the sole Broom original whose gospel-tinged theme is embellished by a lush string arrangement.

Organist Ben Paterson and drummer Kobie Watkins join Broom in Organi-Sation, the core unit on the album and Broom’s current band. During the three months the trio spent in 2014 opening for Steely Dan, they developed a musical synchronicity Broom found “a wonderful surprise. We really solidified our chemistry on that tour, so it was like a hand-in-glove kind of thing going into this session.”

Soul Fingers opens with the Lennon/McCartney gem “Come Together” taken at a stepped-up tempo that Broom knew his trio-mates “would swing to death.” Bobbie Gentry’s “Ode to Billie Joe” features the guitarist’s 7/4 funk arrangement and his horn charts for saxophonist Ron Blake and trumpeter Chris Rogers. Other highlights include a shuffle-swing version of Steely Dan’s “Do It Again” and a bossa nova–infused version of the Beatles’ “While My Guitar Gently Weeps” on which the leader is joined by Brazilian acoustic guitarists Sergio Pires and Luciano Antonio. The 1966 Temptations hit “Get Ready” has an Afro-pop feel, while Broom’s version of Procol Harum’s 1967 baroque pop hit “Whiter Shade of Pale” simmers with soul.

Born in New York City in 1961, Bobby Broom cites hearing a Charles Earland album when he was 10—and later music by Herbie Hancock and Grover Washington, Jr.—as inspiring his love of jazz. By 16, he had a regular gig with bebop pianist Al Haig and was invited by Sonny Rollins to go on tour. While he declined that offer, he did perform with Rollins at Carnegie Hall that same year. Within five years Broom had at last joined Rollins’s touring band, ultimately spending two five-year stints with him.

Prior to joining Rollins, Broom signed with GRP Records and made his crossover jazz debut, 1981’s Clean Sweep rather than join Art Blakey’s Jazz Messengers. After his 1984 follow-up Livin’ for the Beat he could have had a career playing “smooth jazz” but instead moved to Chicago and concentrated on straight-ahead jazz. He continued with Rollins, joined Kenny Burrell’s Jazz Guitar Band, worked briefly with Miles Davis and then Stanley Turrentine and his early idol Earland.

In the 1990s Broom formed the Bobby Broom Trio and the Deep Blue Organ Trio and recorded frequently with both units. He also made three quartet records (No Hype Blues, Waitin’ and Waitin’, and Modern Man) before deciding to focus on the guitar-bass-drums trio as his primary outlet, beginning in 2001 with Stand!

“Whether original, the music of the classic jazz idiom, or nostalgic pop,” critic Neil Tesser has observed, “Broom’s thoughtful lyricism, urban spirit and jazz pedigree have earned him one of the few truly recognizable styles among modern jazz guitarists.”

Bobby Broom and his Organi-Sation will perform a CD release show at Space in Evanston, IL on Friday 10/5. Other dates will be announced in the coming months.