Ella With the London Symphony 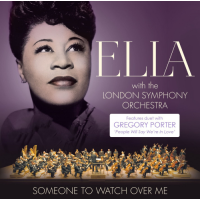 slideshow
Elvis started it, and symphony orchestras are reaping the rewards. Back in 2015, Elvis Presley Enterprises teamed with producers Nick Patrick and Don Reedman, and the Royal Philharmonic Orchestra for If I Can Dream. The 14-song album featured Elvis's original vocal tracks with the original instrumentals removed and replaced by the Royal Philharmonic playing new orchestrations.

I suspect the concept was conceived following an unusual concert at Radio City Music Hall in February 2011. The event featured a collection of Elvis's filmed concert performances in Las Vegas projected onto a large screen while a 16-piece orchestra and Presley's TCB band played on stage behind a sheer screen. In other words, his vocal track from the film was combined with the live music on stage. Your brain was tricked into thinking you were actually seeing Elvis live, and it worked. I was there.

This past Friday, the supersized strings, horns and reeds concept was applied to the American Songbook. Newly released, Someone to Watch Over Me: Ella With the London Symphony Orchestra (Verve) features 12 songs with new orchestrations. The purist in me wants to tell you the Ella experiment is all wrong but, in truth, it's highly appealing and addictive. Produced by James Morgan and Juliette Pochin (above), the album doesn't encroach on Ella's original vocals or diminish them. Instead, they enrich her original vocal and focus your ear on the quality of her delivery. I must confess, enjoying this album feels like getting caught at the fridge late at night eating a slice of strawberry shortcake. [Photo above courtesy of James Morgan]

For the Ella album, the London Symphony Orchestra was recorded at Abbey Road Studios in London. Most of the arrangements were by Jorge Calandrelli (above), with Morgan and Pochin handling Makin' Whoopee! and These Foolish Things (Remind Me of You). Arrangements were written to wrap around Ella's original vocals. Once the orchestra tracks were completed, Ella's vocal tracks were skillfully added and synced up. There are two duets here—one with Gregory Porter on People Will Say We're in Love and another with Louis Armstrong on They Can't Take That Away From Me.

Most of the arrangements are terrific, especially on I Get a Kick Out of You, Misty, These Foolish Things, What Is There to Say and With a Song in My Heart. Some are less successful, largely due to a few sluggish song choices. The good news is that the team will likely get a another shot, since this collection will surely do well. As impossible as this may seem, Ella's voice sounds even better on this recording than on the originals. You realize as you listen that her voice was so beautiful and flexible that she could have used all the strings and French horns she could get decades ago. At least now, Ella has what she should have had all along.

P.S. I'd love to hear Sarah Vaughan, Tony Bennett and Dinah Washington treated to the same supersized backdrop. One can only hope.