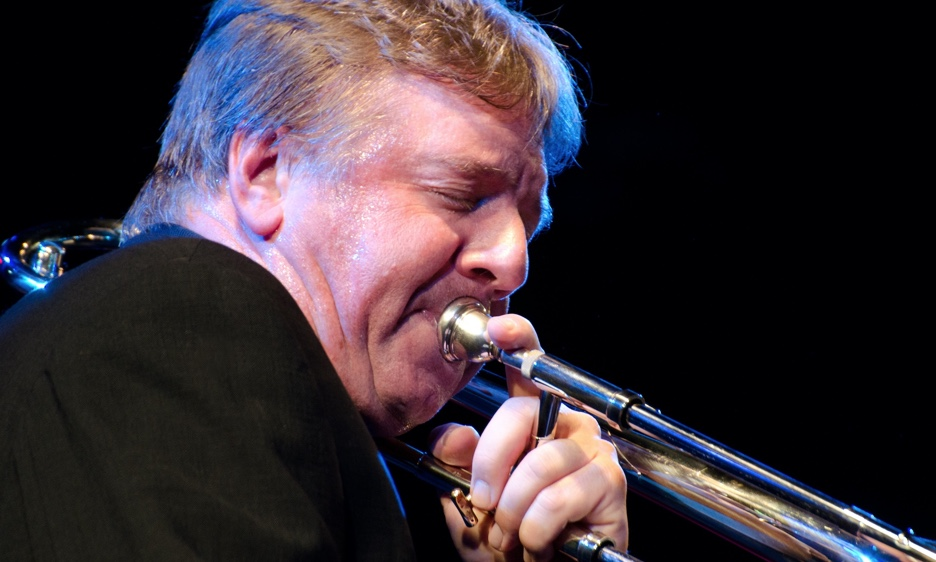 ...authenticity and invention, embracing the layered syncopation, romantic longing and fiery excitement characteristic of a range of danceable genres that fall under the 'Latin' umbrella.
&#151Ed Enright, DownBeat Magazine

New York jazz artist Conrad Herwig has recorded 26 albums as a leader, receiving four GRAMMY-nominations for his own projects. His latest CD release is The Latin Side of Mingus (Savant; 2022). This albums marks 25+ years of the “Latin Side.." series, and is a follow-up project to The “Latin Side of…” tributes to Horace Silver (Savant; 2020), Joe Henderson (Half Note; 2014), Herbie Hancock (Half Note}}z; 2010) Wayne Shorter (Half Note; 2008), Miles Davis (Half Note; 2004), and John Coltrane (Astor Place; 1996). These exciting and individualized projects feature an array of special guests including Randy Brecker, Ruben Blades, Michel Camilo, Joe Lovano, Eddie Palmieri, Paquito D’Rivera, Dave Valentin and many of the hottest players on the international scene.

Herwig is equally facile in a non-Latin arena. He has been voted #1 Jazz Trombonist in DownBeat Magazine “Jazz Critic’s Poll” and nominated for “Trombonist of the Year” by the Jazz Journalists Association on numerous occasions. In constant demand as a sideman, Herwig has performed with Joe Henderson, Horace Silver, McCoy Tyner, and Joe Lovano (featured as a soloist on Lovano’s GRAMMY Award winning 52nd St. Themes CD). In the Afro-Caribbean genre he has toured with legends such as Eddie Palmieri, Tito Puente, Paquito D'Rivera, and Michel Camilo. He is a longtime member of the the Mingus Big Band (where he has served as musical director and arranger including on the 2011 GRAMMY—winning Live at the Jazz Standard). In other big band settings Herwig has also performed and recorded with Clark Terry, Buddy Rich, Frank Sinatra, Miles Davis & Quincy Jones, and the Gil Evans Orchestra. All told Herwig has appeared on more than 200+ albums in what is now a 40 year career.

In 2006 Herwig received the Paul Acket Award (formerly the “Bird Award”). The prize, presented at the North Sea Jazz Festival, is intended for an artist who, according to the international jury, deserves the attention of a broader audience. Herwig is also a recipient of performance and teaching grants from the National Endowment for the Arts. Conrad was elected to the Board of Advisors of the International Trombone Association and has taught at Mason Gross School of the Arts in the prestigious jazz program at Rutgers University in New Brunswick, N.J. where he currently serves as Artistic Director and Chair of Jazz Studies.

“Herwig brings huge presence and when you think how powerful the motion he can generate combined with the sheer traction and moving parts of the latinised stylings it's a no-brainer that you need to listen to this." —Stephen Graham, Marlbank