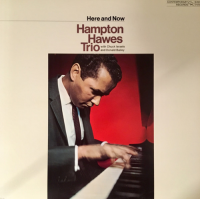 slideshow
In May 1965, pianist Hampton Hawes recorded an album of standards with bassist Chuck Israels and drummer Donald Bailey. The album was Here and Now, an extraordinary session for the Contemporary label. The songs were recognizable to anyone picking up the album in stores, but the execution was anything by standard. Hampton, Chuck and Bailey sail into each song with fresh energy and determination to rock the canoe, so to speak. For example, Hawes and Chuck solo off each other for most of Fly Me to the Moon and What Kind of Fool Am I? and they turn The Girl From Ipanema inside out. It's an beautiful, invigorating album, largely because all three players are so special.

The tracks are Fly Me to the Moon, What Kind of Fool Am I?, The Girl From Ipanema, Rhonda, Dear Heart, People, Chim Chim Cher-ee and The Days of Wine and Roses.

For Chuck, the album was sandwiched between his work in the Bill Evans Trio—which went on an extended European tour in February and March of '65, and then recorded The Bill Evans Trio With the Symphony Orchestra recorded for Verve in September.

Here's what Chuck told me about the Hawes date:

Even though Bill was successful, the trio wasn’t working all the time, so I had time to explore other opportunities. At the time, I was in Los Angeles working as a famous folk singer's music director. That was a frustrating, almost depressing experience because of her habit of singing every song as if the lyric was, “Listen to my beautiful voice.” Her voice was and is beautiful, and she’d achieved her success by depending on it. But it didn't suit songs we took on. [Photo above of Chuck Israels in 1965]

I don’t remember how I ran into Les Koenig in L.A., but as soon as he knew I was going to be there for more than a day or two, he set up the recording session with Hamp. It was my impression that what interested Les and Hamp was the juxtaposition of the way I played with Bill against how Hamp played. If they hadn’t encouraged that, I might have been a little less adventurous and more supportive of Hamp in a more conventional way. In any case, whatever I was doing seemed to please both Hamp and Les. And playing with Donald Bailey was magically uplifting. [Photo above of Lester Koenig by Ray Avery/CTSImages.com]

As far as the session, I do remember we recorded in Contemporary Records' stock room filled with LP boxes. I recall Hamp and I discussed the harmonies for “What Kind Of Fool Am I?," and Hamp was interested in the ones I had come up with while playing the song with Bill. We mostly used them. Hamp was friendly.

I was just starting to get to know Donald, who would later become a good friend as well as musical colleague. I know I was glad Les had included him on the date, since I’d heard Hamp play several years earlier when I’d been in school at Brandeis. Back then, I was sitting at the Jazz Workshop listening to Herb Pomeroy’s quintet when Floyd “Floogie” Williams, a Boston drummer who’d been playing with Lionel Hampton’s band, ran in. [Photo above of Donald Bailey by Francis Wolff (c)Mosaic Images]

He grabbed me by the shoulder and said, “Chuck, you’ve got to come hear this genius drummer.” He took me across the street to hear dthe Jimmy Smith Trio with Donald playing drums. I remember being quite surprised, because I had no idea that Floogie had paid any attention to me or my bass playing—or why he assumed (correctly, it turned out) that I’d understand how extraordinary Donald’s playing was.

So, when Donald turned up on the Hawes date in '65 in L.A., I was already anticipating enjoying playing with him. Donald was unique. His playing had so much variety—so much going on quietly and subtly, generating commentary and enthusiastic lift. Yet all this activity never covered up what others were playing. He always had the appropriate dynamic, from a whisper (or even silence) to a roar, in perfect connection to the emotional shape of the music. Some of us were lucky enough to have had the chance to make music with him.

Hamp is, of course, the better known musician, and I enjoyed playing with him. But I didn’t get to know him as well as I got to know Donald. Donald didn’t like flying, so when I invited him to spend 10 days with us recording and teaching at Western Washington U., he took the long train ride from where he was living in Emeryvlle, Calif. Donald stayed with us in our home, and my family all learned to love him.

Those are my memories—not so much about Les and Hamp, both of whom I wish I’d taken more initiative with and gotten to know better. By the way, someone transcribed the piano and bass parts for “Fly Me To The Moon." Here it is...