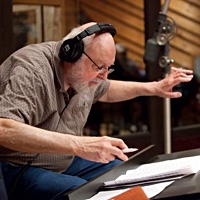 Robert M. Freedman, a jazz pianist, saxophonist and Grammy-winning arranger who orchestrated for artists ranging from Sarah Vaughan and Harry Belefonte to Maynard Ferguson and Paul Simon, and scored theme music for TV shows including ABC's Monday Night Football, died on Dec. 22, 2018. He was 94.

Bob was a long-time JazzWax reader  and an avid email correspondent, especially when I posted on Ferguson or Pomeroy. I was informed late last year that Bob might have passed away, a fact I relayed to Bill Kirchner who reached out to Bob's wife, Tori, in Scottsdale, Ariz., over the weekend and confirmed his death.

Bob's Grammy was shared with Quincy Jones for their arrangement of The Wiz Main Title: Overture Part One in 1978. He also was nominated for three additional Grammys. During a phone call, Bob admitted with a laugh that his low point came in the mid-1950s, when he arranged and played alto saxophone on Music to Strip By, a jazz album of bump-and-grind songs that included Night Train, Shangri-la and One Mint Julep. Even on such an album for Boston's Surprise label, which Bob said was owned by someone with a broken nose, the group was top-notch and included trumpeter Herb Pomeroy and members of his band.

Bob excelled at big band writing, and he counted as his finest moment And We Listened for Maynard Ferguson, recorded first on A Message From Newport  in 1958 as well as his arrangements for Herb Pomeroy's band.

Born in Wollaston, Mass., Bob grew up there. When he was 12, his family moved to Cranston, R.I., where he began studying the clarinet and soon added the piano. His first brush with arranging came when he bought Glenn Miller's Method for Orchestral Arranging. His first professional playing job came at 14. In the Army, Bob was stationed in Arizona, where he encountered an enlisted Chet Baker and played with him on regional Army gigs.

Here's Bob and the trio in 1953 on Piano Moods playing Sophisticated Lady...

Here's Bob's arrangement of A Foggy Day on Margie Anderson's The Blues album in the mid-1950s, featuring Varty Haroutunian (ts) and likely Herb Pomeroy on trumpet. Bob was on alto sax...

Here's Bob's composition and arrangement of And We Listened for Maynard Ferguson from a clip Bob sent along some years ago of the band at Birdland between 1959 and '61...

And We Listened (live at Birdland)

Here's Bob's arrangement of Broadway and Seventh in 1963 by the Bill Berry Combo, on which Bob is playing piano, Berry is on trumpet, Alex Cirin Jr. is on bass and Alan Dawson is on drums. The album's original title was Jazz and Swinging Percussion...

Here's Bob's arrangement of Night Time Is the Right Time for Joe Williams and the Thad Jones/Mel Lewis Orchestra in 1966...

Here's Bob's gorgeous arrangement of Alfie for Sarah Vaughan in 1967...

And here are three that Bill Kirchner sent along:

Here's Construction of the Raft from Bob's The Journeys of Odysseus in 1972, produced by Gary McFarland and narrated by Terry Currier...

Bonus 1: One more from me—here's Bob's piano and arrangement of Deep Purple for Jerry Donato on his It's a Cool Heat album recorded in Arizona in 2004...

Bonus 2: Charles Fox may have composed ABC's Monday Night Football theme in 1972, but “Bob" of “Bob's Band" was Bob Freedman and his arrangement and orchestra. Here's the theme....