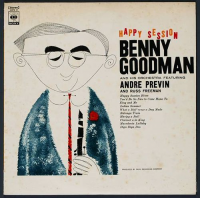 slideshow
Benny Goodman was remarkable in more ways than we often realize. Obviously, his clarinet playing was extraordinary in tone, technique and soulful expression. But his musical judgment, assembly of musicians and taste were impeccable as well. His bands were nearly always exceptional, and he had a golden ear that ensured that his vision and expectations would be met. What's more, he was rarely cliche and nearly always looked for ways to expand into new territory. Two little-known albums that illustrate Goodman's hard-charging and artistically ambitious qualities are Happy Session (1958-59) and The Sound of Music (1959). Both have been hard to come by and are among my favorite Goodman recordings. [Photo above of Benny Goodman in 1958 by Bert Stern]

The first album, Happy Session, was recorded in New York following Goodman's trip to the Brussels World's Fair in May 1958. Goodman is featured on all of the studio sessions' tracks but in varied configurations, including two different quintets—one with Russ Freeman and another with Andre Previn. Since Goodman paid the tab on the sessions through his Park Recording Co., he was able to negotiate deals with two different labels for two-thirds of the material—Columbia and Chess. The balance consisted of alternate takes that would appear on subsequent LPs and CDs issued over the years.

Here's the track breakdown that corresponds with the download that I'll tell you about shortly...