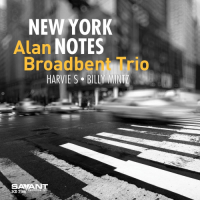 slideshow
I began paying attention to pianist-arranger Alan Broadbent in 1973, when Woody Herman's Giant Steps came out. It was my senior year in high school, and the wife of the band's drummer, Ed Soph, was one of my teachers. I wasn't much of a student during high school until my last year, when I began acing everything. I have no idea what motivated the turnaround. Perhaps the editorship of the high school newspaper straightened me out. Or maybe it was the new batch of young teachers who were less foreboding than the older ones.

Whatever the reason, I loved the Herman album and Alan's arrangements of A Child Is Born and Bebop and Roses. But it was his piano accompaniment on two albums by singer Irene Kral (Where Is Love? and Gentle Rain) in 1974 and 1977, respectively, that won my heart. Alan's way with a piano is still so darn beautiful. His approach has often been compared with the inhaling-exhaling style of Bill Evans, but in truth, Alan is about taste, sensitivity and swing.

On his new album, New York Notes (Savant), Alan is backed by his long-time bassist Harvie S and drummer Billy Mintz. Alan has chosen songs with plenty of mood and attitude. There's Gigi Gryce's Minority, Little Benny Harris's Crazeology, Tad Dameron's On a Misty Night and Lennie Tristano's 317 East 32nd Street. There are two American songbook classics—I Fall in Love Too Easily and Fine and Dandy—but both have become part of the jazz vocabulary. Miles Davis recorded the former twice (in 1963 and 1965) and Chet Baker sang and played it. Fine and Dandy has been recorded by many jazz artists since the late 1940s, including Bud Powell and Sonny Stitt. And then there are Alan's gorgeous originals: Clifford Notes, Continuity and Waltz Prelude.

Interestingly, On a Misty Night is taken a few ticks slower than most versions of the song, giving it a lusher coloration. Tristano's 317 East 32nd Street also is special. The Out of Nowhere cousin seems to move backward and forward at the same time and becomes a colorful workout for Alan, who spins it gracefully in the air as if making a pizza. If there's a common thread running through all of these songs, it's their sophisticated, breathless quality. It's magical to hear Alan burrow deep inside each one and then marvel at how he works his way back out.

An album that shows off Alan's enormous dexterity while giving the beautiful melodies all the attention they deserve. Best of all, it's an album on which Alan dances differently with each song.

Here's Fine and Dandy. Alan knew he had to advance the song's story and not play it straight. It's fascinating to hear how he turns the song inside out in the front half...