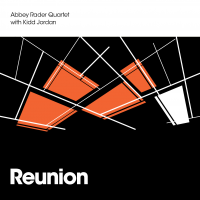 slideshow
In a busy summer, Abbey Rader has released his second recording in as many months. Reunion is a collaboration with saxophonist Kidd Jordan. The album is their first together. It follows the June release of It's Time, a duet session with Abbey and longtime collaborator Peter Ponzol.

The chain of events that led to Reunion can be traced to the early 2000s. Abbey was on tour with Billy Bang and Frank Lowe when the band performed at the Zeitgeist Arts Center in New Orleans. Kidd showed up and sat in. During the concert, Rader and Jordan ended up in a duet. They made a musical connection that day and vowed to play together again. Over a decade later, they finally had their reunion in Miami. Kidd joined Abbey's quartet of John McMinn, Noah Brandmark and Kyle Motl for a special performance. The band set off on three, long-form improvised pieces, each building to a high, spiritual level for which Abbey's music is known.

It's Time was recorded in 1994 and recently resurfaced. The album features a collection of 11 pieces, all first takes, and based on short themes mostly composed in the moment. Ponzol plays alto, soprano, tenor and bass clarinet while Rader plays drum set, hand drums and a variety of percussion. The deep connection between Abbey and Peter dates back to the mid-60s. They both came up through the jazz tradition in New York and played on each other's first records in 1978; The Thing by Rader and Prism by Ponzol. They later worked together in the 80s while living in Europe. The album is a representation of their special communication. As Ponzol states in the liner notes, “so called free or avant-garde jazz often lacks the beauty and musical development heard here."

Both albums are released on Abbey's label, ABRAY Productions. They are available on CD Baby, iTunes, Amazon, Google Play and other major music outlets.