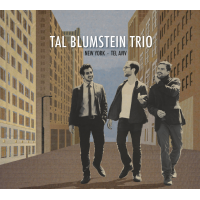 Yes, modern jazz is still very much present among the younger generation, and Tal Blumstein proves it with his debut, New York-Tel Aviv. Freshly out of the New School for Jazz and Contemporary Music, Blumstein teams up with two other Israeli-born jazz musicians who have already made their mark on the New York jazz scene: bassist Max Oleartchik and drummer Itay Morchi. The album features seven tracks, all original compositions, each one being a narrative on its own. This is a beautiful, intimate recording which makes reference to the trio's friendship and time spent together in New York City.

Blumstein's playing is decisive, clean, controlled, never chaotic. Through perfect technicality and a natural aptitude for carefully weighing each note, he offers us an album where he balances livelier, more assertive tunes ("Greenwich Village," "Arlene's Experiment" or "Sunday Morning") with more introspective compositions ("Sophie," "Points of View," "See You Soon"), and even surprises us with vocals on one track, whilst keeping a constant gentleness throughout. This is immediately revealed in the ethereal opening track, "Sophie," where Blumstein grabs the attention with his minimalist approach. Following the tune's sensitive introduction, Oleartchik's bass solo is a nice contrast with Blumstein's precise playing, which then propels the piano forward into the heart of the melody. With its short, smooth bass solo, solid background drumming and subtle crescendo, I am particularly fond of "See You Soon," where Blumstein's contemplative, assured style and rhythmic sensibility are on full display.

Moving on to the more upbeat "Greenwich Village," Blumstein uses this winding melody to explore, in a short time, different textures and tempos. Most attractive about the piece is how the drum and bass are given equal importance, especially towards its conclusion when they form a framework within which the piano gradually unfurls until the final note. It perfectly illustrates the trio's irrefutable synergy.

"Arlene's Experiment" joins the ranks of faster-tempo'd melodies and begins with a crisp drum intro, soon joined in by a piano that runs with the tune with uncanny fluency. On "Sunday Morning," the trio is joined by young saxophonist Alexander Levin, whose earnest playing almost dominates the track. Both pianist and saxophonist play off each other, leading the tune to a final up-tempo groove. Obviously Blumstein is unafraid to share the limelight with his contemporaries, regardless of their number of years of experience; such a level of confidence is refreshing and inspiring.

Dea Juris' delightful singing on "Points of View," and the fact that Blumstein does not depart far from the core melody, makes it very soothing. But it is with "Begani Neta'aticha," which is based on a poem by Rachel the Poetess, that Blumstein pleasantly surprises and seduces with his deep, mellow vocals, which only attest, once more, to his undisputed elegance.