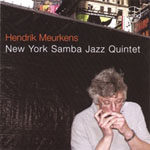 What would you call an NBA-sized German guy who plays harmonica and vibes, and is an unqualified expert in the history, composition, and performance of samba, choro, and bossa nova? Well, "Mister Meurkens seems a little too New York Times, though Hendrik Meurkens certainly deserves that level of respect. More of said respect should follow on the heels of New York Samba Jazz Quintet.

Continuing the sports metaphor, this was a home game for Meurkens: the disc chronicles a Christmas 2005 gig at Cecil's, a jazz club not far from Meurkens' home in New Jersey. While a home game means a home crowd, he could play this set in Teaneck or Timbuktu and still get standing ovations. New York Samba is a joyous collection of buoyant, accessible Brazilian-influenced jazz that mixes enduring standards with some of Meurkens' signature compositions.

Meurkens opens with the João Donato samba "Vamos Nessa, a definite crowd-pleaser that gives Jed Levy's rich tenor sax plenty of room to roam. Meurkens puts Donato on a parallel with Antonio Carlos Jobim; Jobim's strength was as a lyricist, while Donato did the great instrumental samba jazz tunes. (Meurkens gives Jobim some love at the end with a sparkling cover of "Triste. ) Levy alternates between tenor and flute throughout New York Samba, bringing a passionate aesthetic to both. His flute adds loft to Donato's "A Rã and gives a new spin to "Menina na Janela ("The Girl in the Window ), a choro Meurkens played against a Brazilian mandolin on Amazon River (Blue Toucan, 2004).

My experience with Meurkens as a player has been exclusively with his Toots Thielemans-like harmonica, and he does not disappoint; the original "Prague in March and the Ira Gershwin standard "I Can't Get Started share the same qualities of warmth and wistfulness, while Meurkens' solo on Djavan's "Flor de Lis builds from a comfortable glow to a roaring blaze. With that in mind, the crystalline brilliance and exquisite cascades of Meurkens' vibes are both surprising and pleasing, and they have a decided effect on his musical relationship with pianist Helio Alves.

Alves, who has gigged with Joe Henderson and Gato Barbieri, is an ideal foil when Meurkens plays harp, particularly on "Bolero Para Paquito (a Meurkens piece written for another of Alves' former employers, Paquito D'Rivera). But the music acquires a tasty dual-keyboard sound when Meurkens picks up the mallets, similar to what Chick Corea and Gary Burton achieved back in the day—only with a dancing sensation that makes the whole room bop.

New York Samba Jazz Quintet is everything the holidays should be (and usually aren't): happy, relaxed, uncomplicated and celebratory. That's the way to ring in the New Year!