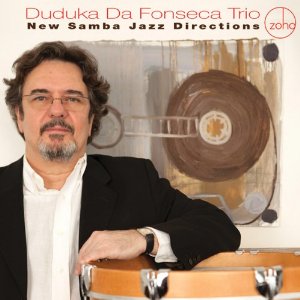 Drummer Duduka Da Fonseca wasn't the first to fuse the rhythmic patterns of Brazil's samba and bossa nova with jazz language and mannerisms, but he's done more with that combination than anybody before him. In the liner notes for New Samba Jazz Directions, Da Fonseca notes that drummer Edison Machado— working with pianist Dom Salvador and bassist Sergio Barrozo in the mid'60s—merged the rhythmic dialects of these art forms first, setting an example for many younger Brazilian drummers that yearned to follow in his musical footsteps.

That group served as a template of sorts for Da Fonseca when he formed a trio with pianist Cesarius Alvim and bassist Richard Santos in Brazil in the early '70s. Many years later, he had the opportunity to record with Salvador, working in the same type of trio context that initially inspired him to dive into Brazilian jazz hybridization in the first place.

Da Fonseca's trio-of-the-moment in 2013, which made its recorded debut on Plays Toninho Horta (Zoho Music, 2011), is a logical extension of all of those groupings. Da Fonseca, pianist David Feldman and bassist Guto Wirtti share in the belief that the steady heartbeat rhythm of Brazil need not overstay its welcome in Brazilian jazz. In fact, what makes this trio so special is the way that it vacillates between acceptance of those rhythmic principles and a mischievous desire to cut against those good-feeling grains. Feldman's "Duduka's Mood," which features grooves that swirl and cohere around the composer's piano, is one such example. Da Fonseca's "Alana," which takes many a sharp turn, is another.

Da Fonseca and his trio mates aren't averse to playing it fairly straight, as demonstrated during the waltzing "Isabella," the beautiful "Tete," and the pleasantly buoyant "Ceu E Mar," but they really distinguish themselves with the curve balls they throw; the driving, yet exploratory "Samblues" serves as the final example of such a pitch on an album full of them.

Remaining at the forefront of a movement decades into a career is no easy feat, but Duduka Da Fonseca is no ordinary drummer. He continues to defy the odds by creating new samba jazz directions from his veteran's perch.