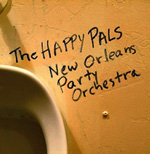 The city of New Orleans may never be the same after Hurricane Katrina, but the monster storm will not dampen the spirit of the jazz music for which it is known. New Orleans jazz is alive and well and has taken root in, of all places, Toronto, Canada. The Toronto-based Happy Pals septet, which has been playing this music at Grossman's Tavern in Toronto since the early seventies, released its first CD, Live At Grossman's, in 1993; this 2005 recording is the Happy Pals' second effort.

New Orleans Party Orchestra is ten tracks of old-time Dixie/Louis Armstrong-flavored jumping jazz swing, with an interesting mix of tunes that includes Bob Dylan's "Don't Think Twice, It's Alright," though I don't think Dylan would recognize this rendition. Two other better-known titles are "Folsom Prison Blues," made famous by the late Johnny Cash; and the Adamson & McHugh piece "Lovely Way To Spend An Evening," which became a part of Sinatra's repertoire. The setting is live, the music is all New Orleans jazz swing, and the band seems to be having a heck of a party. Bourbon Street beckons for this kind of sound.

About The Happy Pals