By MARK CORROTO
September 23, 2006
Sign in to view read count 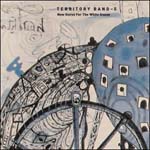 You can certainly find plenty of heady intellectual discussion surrounding Ken Vandermark's Territory Band. He has taken the concepts of jazz and European music and interlaced them with composed and improvised music. (Was that last statement redundant?) In doing so, Vandermark continues the argument begun the day Louis Armstrong played a familiar march "his own way." While Stanley Crouch has made a career telling us what jazz isn't, Vandermark continues to open our ears to what it can be.

Begun at the turn of this new century, the Territory Band combines Vandermark's loyal cadre of Chicago musicians—Jim Baker, Dave Rempis, Kent Kessler and Fred Lonberg-Holm—with his frequent collaborators from Europe. The lineup has changed slightly over the years, but this band has realized lengthy compositions and extended pieces for improvisation that combine for the feel of grandeur.

With that said, this band continues to make challenging, yet listenable music on many levels. The three-disc New Horse For The White House is their fifth release and, like 2004's Map Theory (Okka Disk), where they issued two versions of one track, the band gives us both a studio version and a live recording of each piece to compare and understand the relationship between composition and improvisation.

Now you can break into your own discussion groups or simply listen to the music.

What initially attracted me to this music is the division of labor in Vandermark's compositions. Each member can be heard separate and apart from every other player. The density of music (and ideas) is never crowded. Each piece allows the listener to follow a particular player or idea and the compositions, as garnered from their length, give plenty of room for solos. Vandermark has always eschewed the theme-solo-theme mode for a more challenging approach. Here the music comes together with written passages as signposts that organize the music, but these are the less structured parts and improvised bits.

Highlights include the clever electronics of Lasse Marhaug and the manipulations of trumpeter Axel Dörner. Saxophonist Dave Rempis continues to shine here (as he does when leading his own bands these days), and Jeb Bishop's trombone seat is filled nicely by Johannes Bauer.

Vandermark follows his tradition of naming each piece for another artist. The reference to Charles Mingus on "Untitled Blues is evident in the composition, with a nod to the Mingus blues. The challenge here is to think of Barnett Newmann's paintings as you listen to "Corrosion ... and is "Cards" (for Borges) actually better suited for the writing of Paul Auster? I had to Google the Korean Film maker Park Chanwook. Luckily, having no reference points for Vandermark's sources of inspiration does not detract from the enjoyment of these three discs.