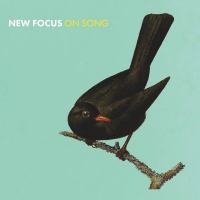 The follow-up to Konrad Wiszniewski and Euan Stevenson's 2012 eponymous debut album is an idiosyncratic amalgam of folk, jazz and classical music. The opening number "Air In D Minor," which subtly fades in at the start and fades out at the close, sounds like nothing so much as a cinematic theme tune, crucially embellished by the Glasgow String Quartet. "Green Park" is similarly soundtrack-ready with a relaxed tenor saxophone solo from Konrad Wiszniewski played over the string quartet.

But often when the strings are omitted there's a limpid quality defined by Euan Stevenson's chordal-rich piano parts, as on "Destination Unknown" with Wiszniewski's lustrous tenor sounding almost Michael Brecker-ish.

It's difficult to pinpoint any one particular style or sound; on "Sophia's Song" for example, the wistful strains of Wiszniewski's low D whistle evince a passing resemblance to the music of Celtic harpist Alan Stivell who brought a gentle fusion of folk and rock to a wider audience. "Little Allegory" is a particularly strong piece infused with a fast and funky string arrangement and unequivocal rhythmic backing.

The archetypical chamber music of "Braeside" has an almost Vaughan Williams quality to it, but eventually cedes to a jazz sensibility with plangent soprano and piano solos. But other numbers such as "Corea Change" employ the strings to top and tail an acid-edged theme, swiftly breaking down into a boppy quartet-driven middle section. Likewise "Fourths Ostinato" is another lively and engaging jazzy track. "Ascension" by contrast is a more lugubrious affair, whilst the charming "Flora" and Stevenson's solo rendition of "Epilogue" are tranquil and affecting ballads.

The mixture of influences presented here may be discombobulating to some ears. The styles can change rapidly in a single composition but more often than not they merge seamlessly with one another and usually, but not always, the arrangements with the strings on eight of the thirteen pieces, work extremely well. An album of clever, original music, On Song clearly demonstrates how the received boundaries between different musical genres are arbitrary or artificial at best.