By Ashley King
December 1, 2001
Sign in to view read count 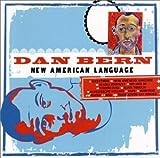 Dan Bern is a folkie at heart. At times too much hype and persona, he might have had us believing otherwise in the past. But his latest release, New American Language, reveals him to be the witty, highly literate singer-songwriter that he is. Absent this time around are the jejune antics that plagued previous releases, leaving a more modest yet largely contemplative collection of folk-rock songs. Instead of wailing about his "big balls," Language finds Bern yearning for a more satisfactory world on the album's title track. "Alaska Highway" is an exceedingly clever jab at American culture, spewing razor-sharp commentary on every phenomenon from Britney Spears to the 2000 presidential election. It is not, however, always the most lyrically prolific tracks that come to light as the most triumphant. "Turning Over" and "Albuquerque Lullaby" ultimately shine, their heart-wrenching vocals exposing a raw beauty in their simple melancholy.

Producer Chuck Plotkin (Dylan and Springsteen) does a fine job with Language. His touch gives the album a clean, crisp sound that manages to escape the redolence of overproduction. Even the tracks that "rock" possess an untried feel despite a moderate amount of polish. Devotees, however, may be quick to point the finger at Bern for the album's more cultivated "pop" tendencies given the less refined quality of his earlier work. But before joining the naysayers consider this: maturation does not always beget compromise.