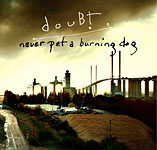 Sometimes bringing two musicians together for the first time can yield some real magic. That was the case when British keyboardist Alex Maguire joined up with Michel Delville and members of the Belgian guitarist's flagship group, The Wrong Object, for Brewed in Belgium (MoonJune, 2008). Never Pet a Burning Dog largely pares things down to a trio featuring Delville, drummer Tony Bianco, and Maguire, who expands his sonic palette here to include electric piano, organ, synth, and that bastion of 1970s progressive rock, the mellotron.

It's largely a free-wheeling blowing session, with compositional contributions from all three members, and a couple of notable exceptions. Bassist/vocalist Richard Sinclair fleshes douBt out to a quartet on three tracks, including "Passing Cloud," which he co-wrote with Maguire, and on which the legendary member of Caravan and Hatfield and the North sings with his warm, melodious voice on one of the disc's most eminently accessible tracks. In addition to singing, he also plays bass on Maguire's opening "Corale di San Luca," a rubato, change-heavy song on which Sinclair gently delivers wordless vocals, and the keyboardist's more aggressive "Laughter," an oblique, jaggedly riff-driven instrumental that's the first indication that douBt has no shortage of teeth. Delville solos with reckless abandon, while Bianco—known for his affiliation with free improvisers like saxophonist Elton Dean, pianist Alex von Schlippenbach and saxophonist Paul Dunmall—provides a tumultuous underpinning. Maguire's overdriven Rhodes solo is a set highlight, going to even more extreme places than he did on Psychic Warrior (Hux, 2005), his impressive album with Dean, bassist Fred T Baker, and drummer Liam Genockey.

The only non-original here is Norwegian guitarist Terje Rypdal's "Over Birkerot," from Odyssey (ECM, 1975). Rypdal has never been one to shy away from high octane, rock-inflected improvisation, but here Delville takes it even further, as Bianco again creates a maelstrom of percussion beneath Maguire's pedal tone, and modal-based solos that turn the heat up even higher.

Bianco's "Sea," not surprisingly, ebbs and flows, with a knotty opening figure that periodically resurfaces, while the drummer's "Aeon" is a brooding but energetic piece featuring a melody from Delville that, despite possessing a voice of its own, again links to Rypdal as one of this album's touchstones. Delville's "Cosmic Surgery" lifts an opening figure from Gentle Giant's title track to Free Hand (Capitol, 1975), but takes it to a far darker place, with Maguire's dense organ and the guitarist's heavily overdriven axe ultimately dissolving into a brooding middle section where, with his guitar turned clean and melodic, Delville references Rypdal's mid-1980s group, The Chasers.

Never Pet a Burning Dog is a rock-inflected, hard-surfaced combination of knotty writing and unfettered free play. Recorded live in the studio over two days, it continues the magic of Brewed in Belgium by both narrowing the focus and expanding the interaction possible with a smaller ensemble. Here's hoping this isn't the last we'll be hearing from douBt.