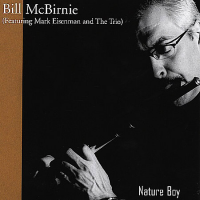 Now that the great Moe Koffman is no longer among us, there’s an opening in Canada for an outstanding straight-ahead jazz flutist, and I suspect that, with Nature Boy, Bill McBirnie has submitted his application and staked his claim.

The choice of an opener — “What a Friend We Have in Jesus” — is unusual, to say the least (I’d have led with the more seductive “Poinciana”), but McBirnie and his colleagues wrest as much mileage from the venerable “Friend” as they can, as is true of every number. In terms of mood and tempo, “Poinciana” is reminiscent of the memorable recording by pianist Ahmad Jamal’s trio with Sumner thumping the tom-toms in the manner of Ahmad’s drummer, Vernell Fournier, and McBirnie’s supple flute adding an extra dimension. Elsewhere, Sumner’s deft brush work helps underline Sam Rivers’ “Beatrice” and launch the traditional folk song, “Billy Boy.”

McBirnie’s diligence and craftsmanship are matched throughout by Eisenman, who plays with remarkable comprehension and assurance, whether soloing or embellishing McBirnie’s perceptive comments. And when the trio comes on board, the partnership is not impaired but broadened and enriched.

According to McBirnie, who has played everything from classical to avant-garde, Nature Boy is his first album of “straight-ahead acoustic jazz with a good strong rhythm section.” Let’s hope it’s not his last.

What a Friend We Have in Jesus; Monk