By MARK CORROTO
August 1, 2000
Sign in to view read count 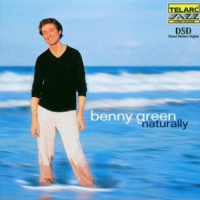 Pity Benny Green. Born 30 years too late, his fantastic piano technique isn’t the stuff of heated debates. The heir to Oscar Peterson’s legacy, Green’s trio work of the 1990s never made one choose sides, like Peterson, Ahmad Jamal, Erroll Garner, and Dave Brubeck fans once did. After a successful run of Blue Note records, Green like Tommy Flanagan and Hank Jones before him settled into the role of sideman. He recorded over a half dozen dates with bassist Ray Brown.

Like These Are Soulful Days, his swan song for Blue Note, this introduction to Telarc records features the same lineup of piano/guitar/bass and the same musicians. Unlike the Blue Note date, where the trio covers classic BN compositions, the majority here are Benny Green originals. I’ve always been a fan of Green’s composing, from his early “Phoebe’s Samba” to his blues influenced record Testifying. His originality, strangely enough, has played second fiddle to his two-handed attack. Such is the fate of a post-bop pianist.

Like Soulful Days the drummer-less trio spreads the soloing around in a relaxed hour of music. It’s almost a clinic of technique times three. Christian McBride is just now filling the hype that surrounded the young bassist ten years ago. His playing, although not understated, is courteous and respectful (maybe filling the shoes of Ray Brown). Russell Malone also has become an accent player as the feature on most of Diana Krall’s recent hit recordings.