Davis stayed in Europe for nearly seven years, during which time he developed close friendships with fellow expatriates like Donald Byrd and Eric Dolphy.

Nathan Davis remembers it like it was yesterday. Sitting in his office at the University of Pittsburgh in the '70s reading a Downbeat magazine. "It said, 'Dexter Gordon returned back, Woody Shaw returned back to great ovations. What ever happened to Nathan Davis?' And boy, a big tear came to my eye, he recalls laughing. "Because I had been playing all the time. Still playing. But people had that kind of attitude towards a musician who was teaching.

Nathan Davis may well possess the most impressive credentials of any jazz musician to ever be almost completely overlooked by the American press. Born in Kansas City, February 15th, 1937, not far from the house Charlie Parker grew up in, he began his professional career, like Bird, playing with Jay McShann. After graduating from the University of Kansas, with a degree in music education, he was drafted into the U.S. Army and sent to Germany where he toured with a band entertaining the troops. "I started to get a taste for Europe. So when I left the Army in 1962 I decided to stay, he says. "The truth was when I decided to stay in Europe, I did so because I wanted to work as a musician and not a school teacher. First I worked with Benny Bailey and Joe Harris in Berlin and then Joachim Berendt produced Expatriate Americans in Europe and Kenny Clarke heard me and invited me to join him in Paris at the club St. Germain des Pres. So night after night I'm playing with Kenny Clarke. Dexter Gordon would come in, Johnny Griffin would come in, Sonny Criss and then Don Byas would come in. And then Erroll Garner and the MJQ, would all come in and play with us. After a while I said, 'Shit, what am I going back to the States for, I'm working with more people over here than I ever could in the States.' And that's why I stayed because if I came back to the States I would just be another cat...

Davis stayed in Europe for nearly seven years, during which time he developed close friendships with fellow expatriates like Donald Byrd and Eric Dolphy. When Dolphy died suddenly in 1964, Davis decided to honor his last wish by bringing over trumpeter Woody Shaw to play with him. "We were working seven nights a week, and after about two or three weeks, Woody came to me and said, 'I wanna go home, I wanna go home.' He was right out of high school when I sent for him. I said, 'Hey, wait a minute, man. You've only been here a month or so, give it time.' So he said, 'Then send for my boys.' - organist Larry Young and drummer Billy Brooks. Together, with Jimmy Woode on bass, they formed the quintet that would appear on Davis' debut recording Happy Girl (with Young on piano) in early 1965.

Later that year the saxophonist got an important call to serve as Wayne Shorter's replacement with Art Blakey and the Jazz Messengers on a European tour. At the end of the gig Blakey asked him to stay. "He told me 'Yeah Davis, I want you to stick with the band. You'll be the musical director and whatever we play, you will write. You will be just the same as Wayne was.' At that time my daughter was just born, I said, 'I really appreciate this, but I can't go back. I'm staying in Paris to be with my family.' And that was my intent. Every time I would see his new group he would tell the story, 'Hey this is Nathan Davis, he used to be my tenor player. I want you all to meet him. He's the only man in America who ever turned me down.'" 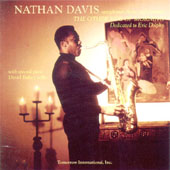 Davis did come back to the U.S. in 1969. At the urging of Donald Byrd and Dave Baker he accepted a position at the University of Pittsburgh, as Director of the first full curriculum jazz studies program. 35 years later, he's still there. During that time he's developed a model program, established a Jazz Hall of Fame, earned his doctorate in ethnomusicology from Wesleyan and recorded a half dozen or so excellent albums as a leader. In 1985 he got back together with Woody Shaw to form the Paris Reunion Band, an all-star aggregation that at times also included Johnny Griffin, Joe Henderson, Nat Adderley and Slide Hampton. After Shaw's death in '89 he lost interest in the group. In the '90s he formed the band Roots, with fellow saxophonists Arthur Blythe, Chico Freeman and Sam Rivers, who was later succeeded by Benny Golson. He played the Blue Note in New York with Dizzy Gillespie and toured as The Three Tenors with Grover Washington, Jr. and James Moody. He'll be back at the Blue Note this month with Moody as part of the saxophonist's 80th Birthday Tribute. With an upcoming New York appearance and a just released new recording, The Other Side of the Morning - Dedicated to Eric Dolphy, on which Davis plays soprano, alto, tenor and baritone saxophones, flute, clarinet and bass clarinet, it might just be time for the jazz press to take notice that Nathan Davis is back.

· Nathan Davis - The Other Side of Morning (Tomorrow International, 2004)

Visit Nathan Davis on the web.