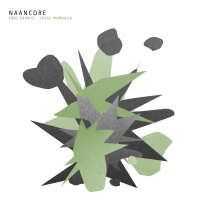 When you've been through the desert on a horse with no name, as the 1971 song by the band America goes, it feels good to be out of the rain. Indeed, music crafted outside of genres and categories often evokes that horse with no name. This duo by Chicago saxophonist Dave Rempis and Oslo electronics/noise artist Lasse Marhaug reminds you that words can barely scrape the surface of this improvised noise. Unlike the "Horse With No Name," there is someone here to give you some pain.

Recorded in 2012 at Marhaug's studio and released in a 300 limited edition of 180-gram vinyl (with digital download), these two-sides proffer the music of noise; scorched, raw, and passionately brutal.

Marhaug has been contributing improvised jazz recordings with outfits like the Circulasione Totale Orchestra, Ken Vandermark's Territory Bands, Fire Room, and Powerhouse Sound, and most recently with Paal Nilssen-Love's Large Unit. His use of contacts and a mixing board can deliver everything from pulsing tones to an all-out offensive to the ears. Of the two tracks, "Skinning The Poke" situates the players side-by-side prodding, gesturing, and commenting by way of Rempis' extended saxophone techniques and multi- phonics and Marhaug's electronics. Opening with a gestural scream, Rempis then proceeds to pop notes, ducking and diving with overblown passages played off Marhaug's electric contacts. The pair play hide-and-seek, trading gestures and mimicking each others sound production. Rempis, who is no stranger to mesmeric music making, leads a two-drummer Percussion Quartet with Paal Nilssen-Love, Frank Rosaly and bassist Ingebrigt Håker Flaten where he often plays howling dervish-like passages. The second side finds the pair figuratively facing each other with Rempis leaning into the full gale force of Marhaug's assault. Their exhausting fight club encounter proceeds as a strength-on-strength scrape. Neither player lays down arms, playing beautiful, brutish, and barbarous music.