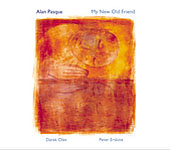 Pianist Alan Pasqua's My New Old Friend clearly refers to his bandmates: drummer Peter Erskine, with whom Pasqua has worked in a trio for the past few years, but whose association goes back much further; and bassist Darek Oles, who has begun playing with Pasqua more recently. But it's the liner notes from Pasqua that perhaps describe the music best: "I hope that the music created here will give you, the listener, a place to rest for a while. It was made with love, care and respect."

Care may be the most important keyword. No idle stream-of-consciousness ramblings here: Pasqua is a spare and economical player for whom each note and chord is given the utmost attention. Avoiding rough surfaces and hard edges, there's an unabashed romanticism about Pasqua's work that makes it eminently accessible, and yet that's not to imply there isn't anything substantive. His reharmonizations of familiar tunes like "You Must Believe in Spring," "All the Things You Are," and "?"Smile indicate a player with a deeper understanding than his easy-on-the-ears approach might lead some to assume. And while his compositions are equally lyrical and delicate, navigating them is more challenging than it might seem. The elegant "Barcelona" rotates through a series of harmonic centres, encouraging everyone to take the care that Pasqua refers to, to find melodies and common notes to tie together the cycle of changes, making it sound whole.

Erskine continues to demonstrate the attention to detail so evident on his recent release with Bill Dobbins, Cologne. His evolution has been remarkable over the past thirty years—from an unquestionably talented but more obvious player to one with a more sophisticated philosophy that integrates more seamlessly into any context. Erskine's accompaniment is sometimes so understated that it almost goes by unnoticed, felt as much as heard; yet his contribution remains key to the collective complexion of the music. Like Pasqua, he is not one to waste a note, and his ability to fit any context and listen as much as he plays, makes him a most sensitive addition to any ensemble. He has the ability to make a tune like "All the Things You Areâ" swing with the lightest touch on a cymbal; and when he trades fours with Pasqua he exhibits the kind of thoughtfulness and intention that makes the slightest figure a statement.

Oles, who has been on the LA scene for a little over a decade but only recently released his first album as a leader—Like a Dream—is another player whose careful yet intuitive note selection and graceful sense of colour give this collection of largely medium and slow tempo tunes its life and light shimmer.

Refined yet playful in a less-is-more kind of way, My New Old Friend appeals on many levels—but by avoiding the obvious and eschewing virtuosic displays, it's the kind of record where one has to pay attention to truly appreciate the riches revealed beneath its soft and engaging surface.

You Must Believe in Spring; Barcelona; Highway 14; All the Things You Are; My New Old Friend; Body and Soul; One More Once; Vienna; Wichita Lineman; Stick Slap; Smile