Skinnie: My Heart Beats On The Moon

BY GINA VODEGEL
August 2, 2008
Sign in to view read count 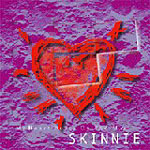 For Dutch musicians it's often tough to find recognition within the borders of their own country, especially if their style is beyond mainstream commercial muzak. It's even tougher if you're from the south and not relocating to either Amsterdam or Hilversum to "work the scenes," as they say. Despite all that, guitarist/songwriter Skinnie Jones and his brother Mo' managed to attract attention with their soulful, funky debut album as Mo'Jones, Strong Man (Inbetweens, 2002). They made it to the national charts, appeared in some prominent shows on national television and performed at the North Sea Jazz festival in 2003. Since then it's become even more evident what charismatic musicians the south does bring forth.

As Mo'Jones, Skinnie and Mo' extensively toured in the Netherlands, Germany and Belgium with acclaimed musicians such as jazz pianist Mike Roelofs, who likes to sip from different musical straws as much as the Jones' brothers do. Mo'Jones has released three albums so far, each differing in genre and style. Skinnie's been responsible for writing most of the tracks and kept a low profile when not on stage, whilst Mo,' as a singer and front man, took care of interviews and public relations. And now Skinnie is his own front man.

Skinnie Jones' debut as solo artist and featured vocalist is an EP of five tracks, the first in planned a series of three. The opening "Bittersweet Tears" has touches of Rickie Lee Jones' "Chuck E's in Love" and the Alessi Brothers' "Oh Lori," and deals with the memories of a love that once was. It's a very catchy tune, doing justice to Skinnie's deep and soulful timbre, with John Martyn, Keb' Mo' and J.J. Cale easily coming to mind as the tracks flow by. "My Heart Beats On The Moon" is somewhat dreamy in both lyrics and music, featuring multi-instrumentalist Bart Oostindie (who studied jazz guitar at the Maastricht Conservatory) and Roelofs, both former Mo'Jones band members. "I Got Everything" is up-tempo, with an irresistible invitation to sing along. It's all very easy on the ears and without pretense.

"Black Hole" delves a little deeper, setting a subtle tone with rhythmic guitar chords and Skinnie's deep voice in a repetitive and mesmerizing manner. Mo'Jones drummer Philip Kerkhofs adds to the color, keeping the repetitive trance intact until the next level's reached and Oostindie and Roelofs join in. The track stands out because of its tasteful arrangement and orchestration—lingering along its basic repetitive theme, with little hints of a restrained yet throbbing bass and the refined touch of Roelofs' piano towards the end.

"If Not For You" is a perfect finale, culminating the musicians' energy and returning to Skinnie's tell-it-like-it-is attitude, while blending moods and sounds. And all it takes is about 15 minutes to get hooked.

Bittersweet Tears; My Heart Beats On The Moon; I Got Everything; Black Hole; If Not For You.