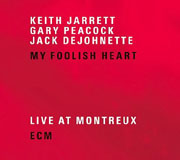 Listeners have come to expect several things from the trio of Keith Jarrett, Gary Peacock and Jack DeJohnette in the 25 years that the group's been engaged in its extended modernist exploration of the Great American Songbook: remarkable musicianship, extreme seriousness and a fairly predictable repertoire.

That's what makes the trio's 18th release on the ECM label, somewhat of a surprise. A complete, nearly two-hour concert recorded in 2001, My Foolish Heart finds Jarrett and company in an unusually upbeat, even playful mood on a refreshingly open-minded set. Along with the usual exquisite takes on standards and show tunes (the title cut, "I Guess I'll Hang My Tears Out To Dry," "The Song is You"), the group tackles mid 20th century jazz classics by Miles Davis, Sonny Rollins, Thelonious Monk and Gerry Mulligan and even a pair of totally unexpected Fats Waller chestnuts.

Jarrett says in his liner notes that problems with heat, sound and lighting at the concert venue propelled the group to perform at "its most buoyant, swinging, melodic and dynamic." (Not to worry, the sound on the discs is excellent.) Whatever the reasons, it's an exceptional effort, especially Jarrett's completely straightforward and winning take on stride piano on the Waller numbers "Ain't Misbehavin'" and "Honeysuckle Rose," apparently the only time he's ever recorded those tunes. Though some still complain about Jarrett's vocalizations and prickly personality, he remains a pianist of astounding technique and improvisatory skills, with the ability to move easily between mainstream and freer settings—and appears fully recovered from his well- publicized case of chronic fatigue syndrome. And Peacock and DeJohnette, brilliant improvisers in their own right, are his perfect foils, together creating a dynamic that's only grown deeper over the years.

Jarrett, Peacock and DeJohnette have made so much superb music together through the years that it's hard to single out any of their albums as essential in itself; it's their collected body of work that's a truly essential part of jazz history. Still, My Foolish Heart is one of their best and that's about as good as any jazz piano trio today gets.

Four, My Foolish Heart, Oleo, What's New, The Song Is You, Ain't Misbehavin', Honeysuckle Rose, You Took Advantage Of Me, Straight No Chaser, Five Brothers, Guess I'll Hang My Tears Out To Dry, On Green Dolphin Street, Only the Lonely.