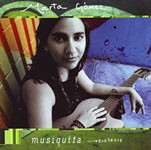 On her fifth album, Musiquita, Columbian singer/songwriter Marta Gómez again showcases the tender and joyful style for which this gifted young artist has become known. In fourteen original songs, Gómez embarks on a rhythmical tour of the Spanish-speaking world. Some of the rhythms featured on the album include the Bolivian cumbia and aguabejo rhythms, the Peruvian el festejo, Bolivia's carnavalito and the zamba of Argentina.

Her tight core rhythm section of Franco Pinna on drums and Fernando Huergo on bass is complemented by various guest stars including Columbian Diego Obregón on marimba. Gómez's mellifluous and occasionally melancholic voice seems to float effortlessly above it all, at home whatever the style of song, often engaging in stimulating dialogue with Yulia Musayelya's flute. Whether or not Spanish or the rhythms are understood, it's all enjoyable.

As on her previous albums, Gómez reveals her interest in social justice on Musiquita. On the moving "Basilio," Gómez sings about the 14 year-old Bolivian silver mine worker Basilio Vargas, whose story is told in the 2005 documentary The Devil's Miner. Another highlight is "Tu Voz," with Gómez showing her talent for vocalese.

After being spoiled by the audiophile-quality of her two previous records for the Chesky label—Cantos de Agua Dulce (2004) and Entre Cada Palabra (2005)—both meticulously recorded in a New York City church, Musiquita is a slight acoustical letdown, though the recording quality remains excellent. In addition, compared to those two previous releases, Musiquita sounds a little more like a world/folk album than world/jazz, if such labels mean anything. There's a little less risk in the music, with less improvisation and instrumentation that sounds, at times, a tad "new-agey. On the whole, however, this is a fine release that is a worthy addition to Gómez's consistently strong catalog, though her Chesky releases would be a better entry point for those new to this fine singer's music

[Note: Musiquita is currently only available as a digital download.]