By Robert Spencer
August 1, 1999
Sign in to view read count 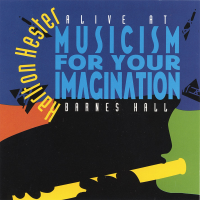 Karlton Hester is an assistant professor of music at Cornell University, where this disc was recorded. He is an accomplished multi-instrumentalist with a particularly affinity for the flute, although he is equally at home on the tenor sax (as well as the soprano, which he plays less often, and the synthesizer, which he plies like a mad acid-rock keyboardist - see the synthesizer workout "Equipoise"). "Musicism" is a term he coined for the interaction of dance, poetry, music, and presumably other art forms: poetess Jessica Ingram is featured on four of the eleven tracks here, reading Dr. Hester's poetry.

The disc opens with "Little Ones," which features Hester alone. He lays down a somewhat bombastic synthesizer foundation, which unfortunately competes a bit with his fleet and appealing soprano. Competition marks the second track as well: "Fundamental Vibe and Liquid Motion." The music is a well-chosen backdrop to the polysyllabic, didactic text recited by Ingram. Maybe too well-chosen: Hester's flute and the bass of Phil Bowler consistently call out to the listener, but one risks losing the thread of the poem to listen to the musicians. And vice versa. Probably this sort of performance is more effective live, when one can focus visually on the poetess and more coherently situate the music in her support.

On the next vocal piece, "Escape Samba," the music is vertiginous and magnificent, courtesy Hester's dreamy tenor, the Cherryish trumpet of Bill Johnson, the celeste of Robb Cowie, and the gembe of Maurice Haltom. Ingram is in and out of the mix with scattered calls. The unusual instrumentation creates a wild hypnotic sound. Although this track is less than two minutes long, the same group returns for "Anti-Stoicism" and the much longer "Harmony," which sound like continuations of the same piece. "Anti-Stoicism" features more of Ingram, giving a history lesson (complete with dates), but "Harmony" is full of fantastic exchanges between Hester and Johnson (and, yes, Ingram and her chalkboard). Not to mention dramatically-charged bowing from Bowler.

Hester's dramatically keening tenor is more clearly heard on "Tears and Polarity," a rubato trio track featuring also the fine trumpeter Bill Johnson and drummer George Reed. It is insinuating and no less effective on "Tone Walk," a study in long and short lines of various qualities. His Dolphyan flute is best heard on "Her Hymn," a classically-tinged number on which Hester's flute intertwines with the bassoon of Darelynn Fung.

As with Hester's other releases, this disc is full of great music, and much more.