Viento de Agua is an original Latin dance/performance band with a groundbreaking new sound. The term itself refers to a Puerto Rican phrase used to describe the damp and humid air that precedes a heavy rainstorm.

The traditional Afro-Puerto Rican rhythms bomba y plena, are combined with various Afro-Caribbean rhythms and jazz to create a fresh contemporary style. The result of this fusion is an explosive sound that both seduces the most skilled dancer and stimulates the most sophisticated listener. Hector 'Tito' Matos, the director of Viento de Agua, explains the concept: “Our purpose is to disseminate our original and creative way of performing these ancestral rhythms not only to our Latino audience but to the rest of the world as well.”

This ensemble was conceived and created in New York City in the fall of 1997. Percussionist and singer Héctor 'Tito' Matos, a native of Santurce, Puerto Rico came up with the idea that master musicians Ricardo Pons and Alberto Toro helped materialize. They recruited some of the best musicians in New York to play the aggressive arrangements: drummer Bobby Sanabria, pianist Desmar Guevarra, bassist Waldo Chávez, and trombone player Joe Fiedler were part of the original band.

During the fall of 1998, Viento de Agua presented their first production under the Qbadisc Label, “De Puerto Rico al Mundo,” produced by Ned Sublette, a recording that received enthusiastic reviews by The New York Times, Latin Beat Magazine and other publications. The record made them winners of the Prestigious 2000 SUNSHINE Award for Best Caribbean Tropical Album, in New York City.

After returning to his native Puerto Rico in 2004, band leader Tito Matos restructured the band, incorporating some of the island’s up-and-coming musicians to the project. In the same year the band released “Viento de Agua Unplugged: Materia Prima,” for Smithsonian Folkways Recordings to much acclaim. On this recording they went for an exclusive all percussion setting using only the hand held plena drums (panderetas) and other traditional percussive instruments as the sole accompaniments for the vocalizations. The record included extensive liner notes outlining the origins of the bomba y plena rhythms.

2009 proved to be a banner year for Viento de Agua as they were invited to reappear at the Smithsonian Folkways Festival in New York. They also self produced the record “Fruta Madura,” which reunites Matos with musical director Ricardo Pons his original flute and sax man.

The record offers twelve original songs with each one expanding the impression of what plena music should be. The record has taken hold in Puerto Rico and New York, and has added to the bands ever growing audience base.

Combining dynamic live performances with the release of “Fruta Madura,” Viento de Agua in 2010 is on an assured course to grand success. 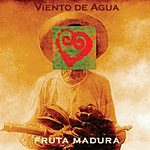 All About Jazz musician pages are maintained by musicians, publicists and trusted members like you. Interested? Tell us why you would like to improve the Viento De Agua musician page.