In 2002 Vector became Vector Trio. The musicians began making use of electronics, including looping devices and effects processors, to expand the possibilities of the trio. Their work to date is showcased in their all-original CDs--Plot Twist (2004), Live in DC (2005), and Paths Unknown (2006).

Vector Trio is a project designed to explore freedom and possibility in three voices, contextualized by cultural disharmony.

Scott Forrey has played trumpet with jazz, funk, Latin, and avant-garde bands for more that 25 years. He was both a student and faculty member at Berklee college of Music in the 1980s, where he studied improvisation with saxophonist George Garzone and bassist Miroslav Vitous.

Among his interests are composition, arranging, and scoring film, digital recording technology, and collaborating with poets and other artists. In 1999 Scott contributed to the score of the independent British feature film MOTION, directed by Tom Clay. Vector Trio represents the culmination of years of exploration into live improvisation, musical experimentation, and electronics.

Gary Rouzer has been playing electric bass since he was 16. After studying upright bass at Berklee College of Music in 1978 more jazz influences appeared. Locally he has played many styles with various jazz, rock and fusion groups. Gary and Scott met in the DC Latin-jazz group Locura. Both had been playing salsa in Latin dance bands and were looking for a more creative outlet while wanting to stay within the Latin influence. Recently Gary has added a new voice to the group--the NS Bass Cello.

Jersey born drummer/percussionist Marshall Hughey has brought a variety of rhythmic styles to this ensemble. He studied with the late Vincent “Muzzy” Mizzoni in New Jersey. Marshall attended the Shenandoah College and Conservatory of Music in Winchester, Va. After graduating in 1982, he performed with local D.C./Va. funk, rock, jazz and experimental projects. Marshall's long music history has seasoned him for vectorTrio's improvisations. Show less 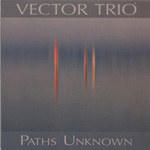 From: Nomina
By Vector Trio

All About Jazz musician pages are maintained by musicians, publicists and trusted members like you. Interested? Tell us why you would like to improve the Vector Trio musician page.