John Thomas Johnson, a first-chair studio musician in Hollywood for 50 years, Johnson played on thousands of recordings -- jingles, commercials, television shows like The Flintstones and feature films. His tuba can be heard on hundreds of movie soundtracks, including The Godfather and Titanic and, most memorably, the John Williams scores for Steven Spielberg's Close Encounters of the Third Kind, the Indiana Jones trilogy and Jaws.

In the back pages of the Los Angeles Times, they ran an obituary for a guy named Tommy Johnson, who died in October at 71 of complications from cancer and kidney failure. Accompanying the obit was a picture of a big, beefy lug grinning in a loud sports jacket. If you looked closely, you could see the man had LIPS!

Johnson performed as tuba soloist with the Los Angeles Philharmonic Orchestra, the Pasadena Symphony, the San Fernando Valley Symphony, the LA Pops Orchestra, the U.S.C. Wind Ensemble, The LA Tuba Quartet, and with the Henry Mancini Orchestra. Johnson can be heard on the recording of The Manhattan Transfer meets Tubby the Tuba CD.

Conductor John Williams called Johnson “one of the great instrumentalists of his generation. Not only was he the voice of the shark in 'Jaws,' and that of the aliens in 'Close Encounters of the Third Kind,' his performance across the full range of the repertoire inspired not only me, but a whole generation of young tubaists.”

Johnson recalls Jaws: “I guess the one that sticks out the most in my mind is Jaws, that day I was late to the studio because as you know, I taught public school for many years and mixed that in with studio work this was one of those days it was raining and I was waiting for a substitute teacher to arrive. Because of the rain, the substitute teacher was late so I had to wait longer than I wanted to. By the time I got to the 405 (Freeway) and headed towards Fox (studios), there was a big traffic jam so I was 30 minutes late to the call.

I walked in, John Williams was on the podium, came in through the side door when I should have come in through the back door, I had to squirm my way through through the cello section to get back to the tuba (spot). The whole time he’s watching me with anticipation. Basically they’re just sort of waiting for me to get my tuba out. I very hurriedly got it out, I was really out of breath.

When you’re late like that, you’re just really all upset. So as I sat down and barely got the mouthpiece in the tuba I happened to open the book and the first cue is this big long tuba solo. And I can see him with his baton looking back like, “Are you ready?” And I haven’t even blown a note. I said, “Ok!” (laughter).

He started in with the (bum-bum-bum-bum) and this tuba solo, (sings)…well, I played it really fine. In those days I had a lip that just responded immediately, I never had to warm up. I never believed in warming up anyway, so I didn’t. Being the age I was at that time, I was in really great shape.

Besides that, I was thinking about what was happening at the junior high school while I’m playing all this stuff. I had to leave before the substitute got there, had to call in another teacher who was not a music teacher just to hold down the fort because I said, “ I must leave now. I can’t wait any longer.”

I was preoccupied with a little worry so my thought was not totally on the music…maybe that was good because I just nailed it every time. Didn’t have any trouble playing it. But later on I was thinking, “Hmmm…that could have been pretty hard.”

Because I was only playing CC tuba (Mirafone 185) at the time and this solo kept recurring in almost every cue. I found out later that was the theme for the shark. I asked John Williams later why he wrote that so high for the tuba, why didn’t he write that for the french horns since it was in the perfect range for them? He said, “Well, I wanted something that was in that register but I wanted it to sound a little more threatening.” Ahh..Show Biz!

In 1981 Johnson was awarded the National Academy of Recording Arts and Sciences “Emeritus Most Valuable Tuba Player”, as he had recieved the award for years on end, thereby making him ineligible to receive this award ever again.

The LM-10 is the very mouthpiece that Mr. Johnson was using in the studio on movie soundtracks week after week after week until his passing. If you're looking for a fast attack without having a mouthpiece that's too bright, the LM-10 will "light up" your horn like no other. The rim has a wide inner diameter and is very cushioned (much like the C4 rim). The design of the rim and the mouthpiece is very similar to a Marcinkiewicz N4. If you like a wide cushioned rim with a shallow cup, look no further! You're home! 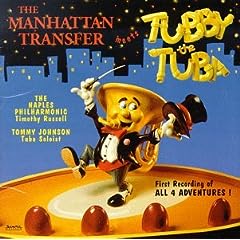 All About Jazz musician pages are maintained by musicians, publicists and trusted members like you. Interested? Tell us why you would like to improve the Tommy Johnson musician page.