The Mississippi Shieks were a very popular string band that came out of the Delta in the 1920's. They consisted of the Chatmon Brothers, Lonnie and Bo, and their neighbor Walter Vincson. The Shieks usaully played dance numbers with Lonnie on the violin, Bo on the guitar and Vincson doing vocal duties. They appealed even to white audiences becuase of their snappy racy repertoire. These type of songs were usually referred to as Hokum Blues, a term for blues that were tongue-in-cheek concerning taboo subjects.

The band was named after the Rudolf Valentino movie, 'The Sheik,' which came out in 1921. They may have started using that name by the middle 1920s, but they did not record until 1930. Between 1930 and 1935, the Sheiks toured throughout the South, as well as making it to Chicago and New York. They apparently played Chicago quite a bit, staying with Tampa Red and gigging at the Flamingo club. The Sheiks recorded about 70-80 sides for OKeh, Paramount, and Bluebird. Many of these were filled with double entendres, such as their song, "Bed Spring Poker."

Their biggest hit was 'Sitting on Top of the World'(1930) which Howlin' Wolf later reworked. Eventually, the tune would also be covered by Cream, Bob Wills, Bob Dylan, Bill Monroe, Frank Sinatra, the Grateful Dead, and Harry Belafonte. "Stop and Listen Blues" (taken from Tommy Johnson's "Big Road Blues") also was a minor hit. They also played behind Texas Alexander on some of his tracks. Their music has always been popular an is readily available on various labels as Document, Yazoo, Columbia, and Classics Blues. 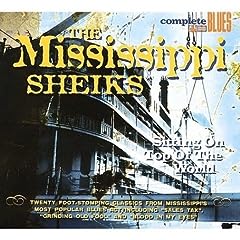 All About Jazz musician pages are maintained by musicians, publicists and trusted members like you. Interested? Tell us why you would like to improve the Henry Thomas musician page.