Terje is currently - fall 2013 - working on his new album with Jeff Lorber and Jimmy Haslip. It is expected to be another slammin' production building on the tradition of Urban Vacation, the previous very successful album project featuring the same core trio!

On Terje's album Urban Vacation from 2010: Expanding upon the explosive energy, compelling melodies, and stylistic diversity of his previous acclaimed album “Traveler,” the Norwegian native - celebrating many years in the Los Angeles area, living mostly near the beach—on his new album takes a joyful “Urban Vacation” with contemporary jazz greats Jimmy Haslip and Jeff Lorber and breaks ground on a unique musical vibe best described as “groove jazz.”

“It’s great to look back and think about all the different styles of music I’ve played and the wide variety of places I have performed in my life,” Lie says. “When I’m on stage performing or recording music in the studio, time disappears. The same thing happens when I write. Whether you consider that spiritual travel or entering a different dimension, it’s still the ultimate experience of traveling somewhere else. I like to bring that experience to my audience. I love the process of writing, recording, and performing live, because I get to enter that unique and fascinating realm and build on that excitement with the anticipation of what happens next. Seeing how much work Jeff and Jimmy put into “Urban Vacation” has definitely inspired me to up my game and expect more from myself as a composer, musician and performer. It’s great to have the opportunity now to share that with more fans than ever before.” And he continues, “Jeff and Jimmy enlightened me to many new angles and concepts that made this a fantastic experience for me. It’s been a great thing to record with them and the result is a seriously kickin’ album!”

Saxophonist Terje Lie (“Terry Lee”) started his career as a musician during high school in Norway with his blues/rock band with which he appeared as a lead vocalist on Norwegian television at seventeen years of age. Over time, he became a part of that country’s scene of young rising jazz artists and freelance musicians, featured as both a singer and saxophonist. Lie toured Norway, Sweden, and Finland with different groups and appeared on the jazz shows of NRK, the Norwegian equivalent of the BBC. Lie was also a recipient of a grant from the Norwegian State Fund for Performing Artists.

Lie later decided to move to the U.S. since his favorite styles of music “were being created in this country 24/7 everywhere.” Loving the Southern California climate and being “a certified beach bum,” he chose L.A. as his new base. Since then he has been a jazz artist and freelance musician, performing in clubs and at festivals and concerts throughout the West Coast. Lie has a degree in music education as well as a Master of Music degree. He is active in music education and as a clinician and when time allows, he also donates time to children’s music programs.

“Adding Haslip and Lorber to his team gave rise to a fascinating collaborative process that sparked what became a truly adventurous, R&B-driven contemporary jazz album.”

“Adding Haslip and Lorber to his team gave rise to a fascinating collaborative process that sparked what became a truly adventurous, R&B-driven contemporary jazz album.”

TERJE LIE Urban Vacation T-Cat Records Put the Yellowjackets’ bassist Jimmy Haslip and keyboardist/composer/producer Jeff Lorber on your team, and you’ve laid the groundwork for a jazz classic. That’s exactly what native Norwegian/L.A. based sax man Terje Lie (say “Terry Lee”) has done for his latest solo release, URBAN VACATION. Hot on the heels of his critically acclaimed TRAVELER album, Lie has definitely cranked it up a whole lotta notches for this killer collection of ten amazing tunes, all but one of which were written by Terje, Jimmy, and/or Jeff. The one cover is an awesome treatment of the Roy Ayers Ubiquity classic “Red, Black and Green.” Oh, yeah! This could easily end up being one of the top contemporary jazz albums of 2010. So let’s break it down… Terje Lie’s smokin’ sax, Jimmy Haslip, and Jeff Lorber producing and playing and ten tracks of uber-hip, tasty fusion funk. What’s not to love about URBAN VACATION?! When was the last time you vacationed? ~SCOTT O'BRIEN - Smoothjazz.com

Clinic description in the works. Students - beginner to advanced! 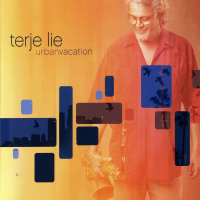 All About Jazz musician pages are maintained by musicians, publicists and trusted members like you. Interested? Tell us why you would like to improve the Terje Lie musician page.