With a name like Tanja Maritsa one might guess that the London based singer songwriter, has some exotic connections. Indeed they might be even more exotic than you first imagine....

Born to an English mother and Croatian father, Tanja spent the first five formidable years of her life living in Paris, France. It's no irony then that her first spoken words were spoken in the language of love - French! Her early years growing up in Paris were extremely vital to her development as an artist and as is evident from her new album 'Fragile', these images and sounds remain seared into her soul, and to this day are a vital part of her compositions.

However while Paris and the French culture are important, there have also been other influences on Tanja as an artist. Perhaps the most “instrumental” of these came from her mother :“My mother has a great voice and used to love anything from Puccini to Ella Fitzgerald and that's how I developed my passion for music'. However, despite success at an early age and catching the eye of musicians like Rick Wakeman, on the advice of her school teachers Tanja decided to pursue the sciences and moved away from London, yearning to return to her love of music, as soon as possible. A few years later, and back in the big city, fate took a hand when she met folk jazz teacher Colette Meury (teacher to many a famed singer: Beth Gibbons and Liz Frazer to name but a few) who recognized, and encouraged her talent and in 2005 Tanja formed her own jazz folk covers band with guitarist Paul Sogaard, performing in many venues, in and around London and New York.   Tanja went on to create her own project and 2008 saw her first professional release on Freedom Music, Ltd,with 'Child in My Heart', produced by the legendary arranger Richard Niles and featuring the remarkable piano instrumentation of Gwilym Simcock. Originally intended to be an album of covers, after hearing her own material, Niles strongly encouraged Tanja to write more and ‘thats how I caught the writing bug’ !.Tanja's music has already attracted a lot of fans and overwhelmed by the response she was eager to get back into the studio and start recording her second album ‘Fragile’. The album includes 10 tracks of her own material and two covers. It opens with her hotly tipped Single ‘Live for Today’, a light hearted jazzy French chanson, and takes us on a journey of love and life from jazz (‘No More the Blues’, ‘Wont You Dance’) to folk (‘The Other Side of the World’, ‘La Catrina’) and world music (‘Fragile’, ’In Love Again’ ‘Libertango’), ending with Tanja’s beautiful melancholic song ‘Fading Grace’.

Tanja has once again teamed up with Niles, as well as Gwilym Simcock, not to mention Richard Cottle, Sam Burgess and Gary O’toole. Also featuring on the album as a special guest, is the highly esteemed oud player Naseer Shaama, who Tanja first met on her travels in Egypt 'I was thrilled when Naseer said he would join us and we recorded the album in London and Cairo Show less

"A voice which deserves to be mentioned in the same breath as some of the greats, Nina Simone and Ella Fitzgerald" Gareth Forman - Music Journalist

"You have a lovely sound, Keep going strong" Elkie Brooks 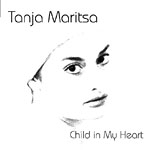 Child in My Heart

From: Child in My Heart
By Tanja Maritsa

All About Jazz musician pages are maintained by musicians, publicists and trusted members like you. Interested? Tell us why you would like to improve the Tanja Maritsa musician page.