Having spent many years as a free improv guitarist, noise artist and sound manipulator, Dave swapped to saxophone as a more directly expressive (and portable) alternative.

Born to play the drums, Steve is rarely to be seen without a pair of sticks within reach. He's played in almost every musical context imaginable, from backing famous cabaret artists (he won't let us say who) and playing at Heavy Metal festivals, to New Orleans-style brass band The Brasshoppers and Zappa covers band The Muffin Men (2 albums & DVD plus european tours). He studied drums in Holland with Pierre Van Der Linden and Han Bennink, played in free improv band Marvin Suggs, gigged with The Grandmothers (featuring Don Preston, Jimmy Carl Black & Bunk Gardner), co-wrote and performed music for the play ‘The Dreaming’ by Clive Hopwood and recorded with ex-Spooky Tooth/Mott The Hoople guitarist Luther Grosvenor in The Ariel Bender Band. When he’s not teaching drums, he’s busy playing sessions for a variety of Liverpool artists. Described by Jimmy Carl Black as “my favourite english drummer” he's the only rhythm section we need. Show less 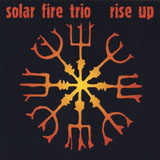 All About Jazz musician pages are maintained by musicians, publicists and trusted members like you. Interested? Tell us why you would like to improve the Briggan Krauss musician page.