A native of Fukuoka, Japan, Sayuri Goto has been playing piano since she was four years old. As she grew up Sayuri developed a love of jazz, and soon her gift for the music became evident. After moving to New York in 1997 she studied jazz piano at the New School University and the Manhattan School of Music. She also has studied privately with such renowned jazz keyboard artists as Bruce Barth, Andy Ezrin, and Mike Longo, and Latin jazz pianist Alfredo Valdés, Jr.

Currently, Sayuri is a member of trombonist Benny Powell’s quintet, bassist Bill Lee’s Mo’ Betta’ Band, and the George Gee Big Band. She has toured with guitarist Randy Johnston and, during the spring of 2005, played for the off-Broadway show, Monk. Sayuri also has performed with such jazz artists as Carl Allen, T.K. Blue, Daniel Cater, Carla Cook, Dwayne Cook Broadnax, Joe Ford, Darryl Hall, Billy Hart, Gene Jackson, Earl May, Lonnie Plaxico, Nat Reeves, James Spaulding, and Paul West, among many others. She has appeared at numerous popular New York City jazz venues, including the Blue Note, Birdland, Sweet Rhythm, the Lenox Lounge, the Jazz Gallery, Kitano, CBGB’s, and Jazzmobile, as well as the One Step Down and Twins in Washington, D.C.

Sayuri is quickly gaining recognition in the jazz world as both an instrumentalist and a composer. Her compositions have been recorded by Benny Powell and Randy Johnston. In 2005 she produced and released her debut CD, Flashback (Fever Pitch Productions), co- produced by Benny Powell. Joined on this recording by bassist Nat Reeves and drummer Gene Jackson, Sayuri weaves a rich array of musical influences �" classical, Latin, pop, and Japanese folk music �" into a highly sophisticated and expressive jazz fabric. Her touch at the keyboard is at times strong and percussive, at other times light and delicate, and her playing is crisp, yet always lyrical. Throughout this CD her trio exhibits remarkable unity and cohesiveness, performing challenging pieces by Randy Weston, Thelonious Monk, Frank Foster, and Dizzy Gillespie, along with four of Sayuri’s original works. As jazz veteran Benny Powell predicts, “Sayuri Goto has a big future ahead of her.” 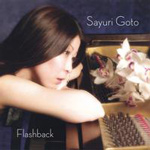 All About Jazz musician pages are maintained by musicians, publicists and trusted members like you. Interested? Tell us why you would like to improve the Sayuri Goto musician page.